The Site Management Plan (SMP) for the proposed site of the Berkeley Lab Second Campus at Alameda Point was finalized on November 18.  Prepared by the city’s longtime environmental consultant, and signed off on by the Navy and regulatory agencies, the document was prepared in order to mitigate potential risks associated with development of the 45-acre parcel near the ship docks. Its primary purpose is to provide direction to construction contractors and workers so that their digging, dewatering, and soil handling activities do not jeopardize the environment or the health of the surrounding community.

The document offers a crash course on the 20-plus years of environmental cleanup of the area, including areas that barely intersect the Site on the margins.  Even if the area were never to have been polluted by Navy activities, the SMP would still be required because of a decade-old city ordinance governing digging into a subsurface layer called the Marsh Crust that contains petroleum-related pollution.

What is the Marsh Crust?

Before 1900, the areas now occupied by Alameda Point and Bayport were tidal marshlands. In the late 1800s and early 1900s, before the health effects of industrial pollution were known, two industries nearby dumped their waste into the water. One of those industries was a coal gasification plant in Oakland.  The other was the Pacific

Coast Oil Refinery located at what was then the tip of Alameda, not far from Encinal High School. Much of the petroleum-related waste, classified as polynuclear aromatic hydrocarbons (PAHs), settled in the marsh.  Between 1900 and 1940, these marshlands were filled with dredge material to create more land.

PAH contamination created the “marsh crust” layer at four to fifteen feet below ground surface, which is a thin layer of PAHs and oil believed to come from historical waste discharges prior to infill.

No one was concerned about this marsh crust caused by former private industrial activity until the Navy decided to close down the base.

By the time the Navy was ready to close down the base, including the area that is now Bayport and the future Alameda Landing, soil boring and groundwater testing was routine.  Underground tests in the late 1990s are what led to the Remedial Action Plan and Record of Decision that were signed in 2000.  (If these documents were drafted today, they would probably have the term “carbon sequestration” in them because this carbon waste is best left where it is – sequestered in the earth.)

Those two documents led to the creation of Alameda’s “permit-before-you-dig” Marsh Crust Ordinance.  The city’s ordinance requires a permit only for digging projects that dig deep enough to potentially encounter the marsh crust — that is, for digging deeper than the threshold depth.  The ordinance is in place so that excavated soil containing petroleum-related waste is properly handled.  The Marsh Crust extends from the Bayport/Main Street area about halfway out onto the Point at 4 to 15 foot depths.  A significant portion of the proposed Lab site (see maps below) does not have any Marsh Crust underneath.

Cleanup of Navy contamination at Site in final stages

Some work, including groundwater remediation, is in the final stages.  And some groundwater is past the active remediation stage and now in the stage during which contaminants will be degraded by natural processes.

The land will be cleaned to commercial standards ahead of the Lab’s timeline for occupancy. If any digging, trenching or excavating encounters a treatment zone, then more stringent handling procedures and protocols would come into play.

It will be the duty of the contractors to develop a site-specific Health and Safety Plan for their workers based on the disclosures in the Site Management Plan.  These health and safety plans have to be submitted to the Navy and regulatory agencies for review.

The SMP describes the protocols for handling soils from the Marsh Crust, such as dust and erosion control.  The SMP includes protocols for dewatering excavated soil, handling of asbestos and lead-based paint during building demolition, and an air monitoring system.  In certain areas, vapor intrusion measures will be required, which could include a vapor barrier, passive venting systems under slabs, and podium-level (partially above-ground) garages with natural venting.

The Navy began comprehensive investigations of the area being offered to the Lab starting in the late 1980s.  They analyzed for metals, petroleum-related compounds, PCBs, pesticides, chemicals that evaporate, and a form of hydrocarbon called PAHs (polycyclic aromatic hydrocarbons.)  More than a dozen above ground storage tanks containing paint stripping chemicals and fuel were removed from the area.  Underground fuel storage tanks from an adjacent area were excavated.  Soil has been excavated.  Leaked jet and diesel fuel has been removed using vapor extraction, chemical neutralizers, and bioremediation.  Monitoring wells and former injection/extraction wells (evident as PVC stubs in the ground) dot the area.

Considering the contamination history, the concerted cleanup effort over the past two decades, starting before the EPA became involved, has come a long way.  The suitability of the site for commercial or residential uses has been, or will be, satisfied by the remediation programs under the Comprehensive Environmental Response and Liability Act (CERCLA) and the Petroleum Program.  Furthermore, when discounting the fact that no groundwater would ever be used for drinking water, the site would meet the even higher unrestricted residential use standard much sooner. 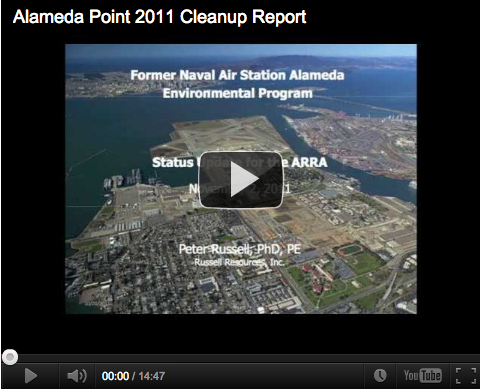 Dr. Peter Russell, the city’s environmental consultant, made a presentation to the Alameda Reuse and Redevelopment Authority on November 2, 2011, updating them on the status of cleanup at Alameda Point.

This video is an edited version with added images.

(Note:  The phrase “closed site” used in the presentation does not mean off limits.  It means active cleanup is finished.)