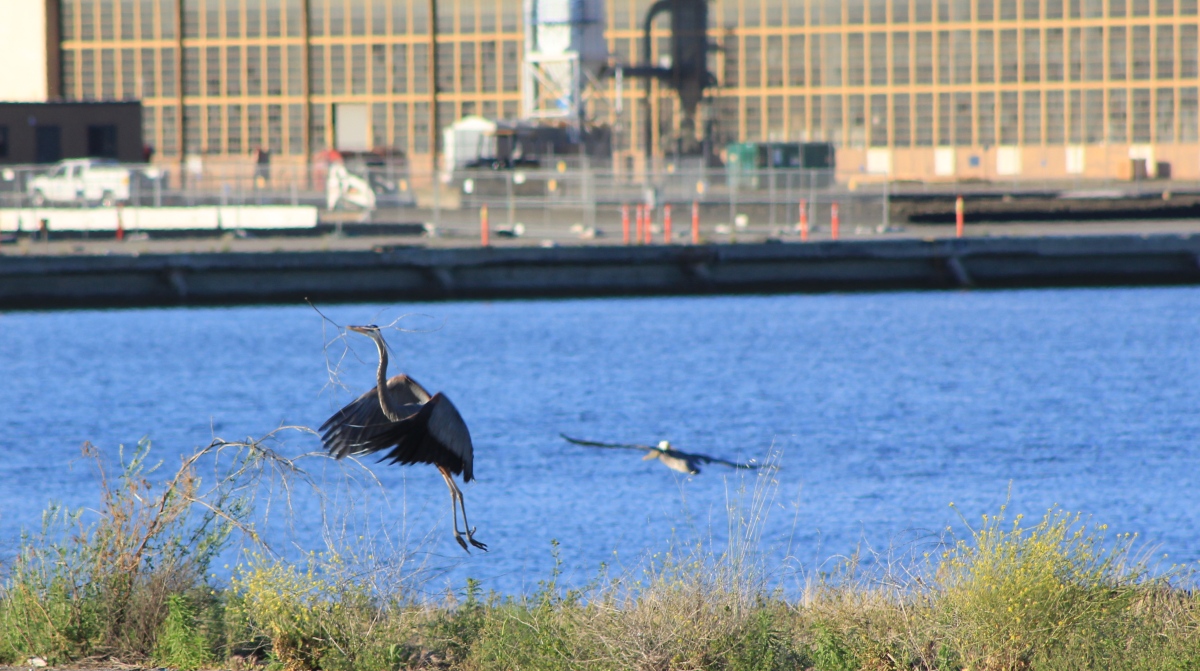 Returning part of the Seaplane Lagoon shoreline to nature is one of the biggest changes that have emerged in the planning process at Alameda Point.  The design proposal for the western side of the Seaplane Lagoon echoes the major theme of the Greenspace Project of Golden Gate University’s Center on Urban Environmental Law – the interconnected ecosystem.

The draft Town Center and Waterfront Precise Plan for the Seaplane Lagoon and eastern entrance area, presented to the Planning Board on August 21, offers a number of new concepts, including moving the proposed marina from the west side of the lagoon to the east side.   The waterfront plan is being refined concurrently with zoning changes, an environmental impact report, and a master infrastructure plan, which are all aimed at providing the level of detail necessary for the city to start marketing property to investors in 2014.

In reporting to the Planning Board on design plans of the city’s consultant, Skidmore, Owings and Merrill (SOM), city staff stated:  “Due to the vast scale of the study area and the Seaplane Lagoon as its centerpiece, the Town Center will be able to support a wide variety of unique waterfront experiences—some of which build and expand upon existing assets and activities, some of which introduce entirely new opportunities.  SOM proposes the following four waterfront zones and experiences:

3. Urban edge—along the eastern side and portions of northern edge with marinas, docks, eating patios, overlooks, and ferry service.

4. Industrial—further south on the eastern side with maritime uses located near the MARAD ships and the USS Hornet.”

Climate adaptation grant funding needed – As currently envisioned, however, the de-paving, removal of buildings, and alteration of the western Seaplane Lagoon shoreline area is put off into the distant Phase 3 future — a decade or more from now — when presumably a surplus of infrastructure funds will allow for implementation.  One option available for timelier implementation would be to begin now seeking grant funding from agencies that focus on shoreline climate change adaptation.  There will be no commercial development on the western side of the lagoon, and therefore the project would become a public asset.

Lying directly to the west on the Nature Reserve is the Runway Wetland, whose habitat value would be greatly enhanced by a connection to the Seaplane Lagoon.  Additionally, the draft Master Infrastructure Plan predicts a $10 million savings if the area were allowed to become tidal wetland as sea level rises.

Unless otherwise noted, all photos are copyright Richard Bangert.  Permission requests appreciated before reproducing.  See “About” page for contact info.