Ferry riders at the Alameda Main Street Terminal will soon be boarding the MV Hydrus, the cleanest running 400 passenger ferry in the world.  The state-of-the-art ferry is designed for quicker on-boarding and off-boarding, faster speeds, low noise and vibration, and low emissions.  The bicycle storage capacity will be more than doubled to 50 from the current capacity of 20 on the MV Encinal, which it will replace.

Captain Al Lewis and the Hydrus crew were running through training exercises in the Oakland Estuary on March 28.  They stopped at the Main Street Terminal just after the Encinal departed with passengers.  The Encinal was built in 1985 and was owned by the City of Alameda during the period when the city operated the ferry service to San Francisco.  At 27 meters in length, the Encinal looked small by comparison to the 41-foot-long Hydrus.

END_OF_DOCUMENT_TOKEN_TO_BE_REPLACED

The rain ended, the sun came out, and so did the harbor seals at Alameda Point.  So many of them came out of the water to warm up on their new float on January 5, hardly any of the structure was visible.  The number has many observers asking for a second float.

The regional ferry agency installed the new float after removing an old Navy dock used by the seals, in order to make way for a ferry maintenance facility.

“I nearly keeled over when I saw the platform,” said Lisa Haderlie Baker, harbor seal monitor and Alameda resident.  “So many seals packed cheek by jowl, literally, that I had to count them four times using binoculars to make sure there were 60 of them, at least, basking in the sun, which I knew had to be close to a record.  It was a tremendous thrill.”  END_OF_DOCUMENT_TOKEN_TO_BE_REPLACED

Ferry riders driving to the Main Street Ferry Terminal began using an extra parking lot in May. The city-owned O Club parking lot across the street from the terminal provides 121 spaces under a temporary license agreement with the Water Emergency Transportation Authority (WETA). Despite the added parking lot, the street shoulder and unpaved lot west of a dog park continue to absorb overflow.

“Ridership has grown 29 percent since May, the month we opened the lot,” said Kevin Connolly, WETA’s manager of planning and development. “Given that the street and dirt lot were basically full at that time, it makes sense that the O Club has absorbed the additional riders.”

END_OF_DOCUMENT_TOKEN_TO_BE_REPLACED 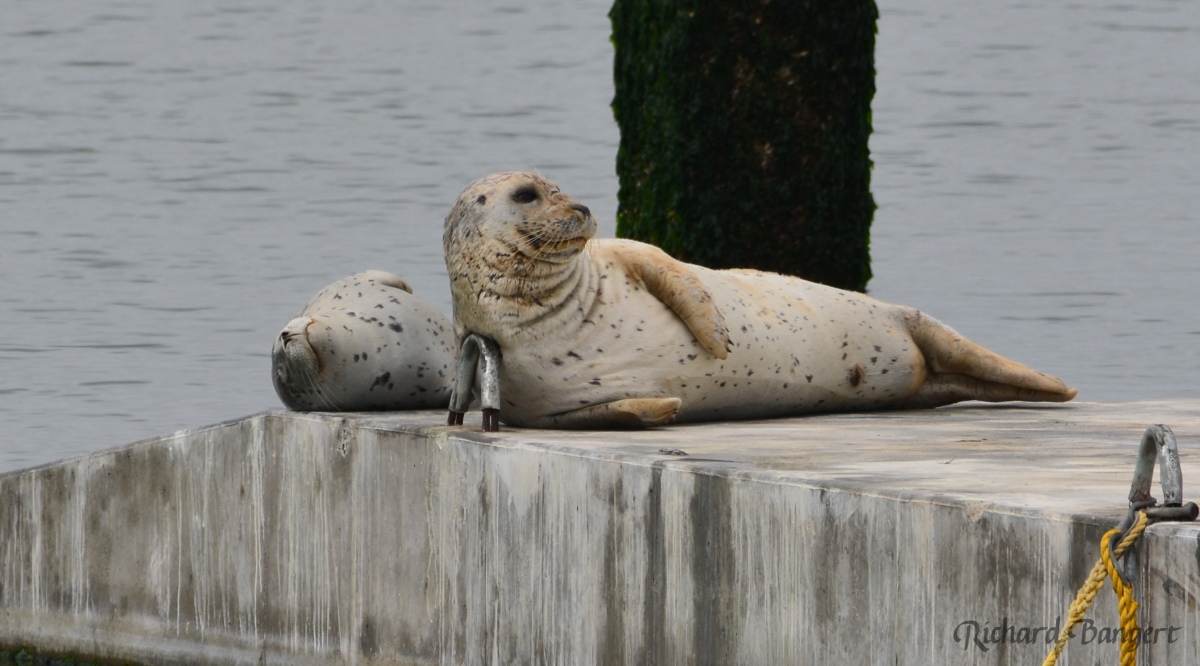 A new concrete float for harbor seals was delivered to Alameda Point on June 22. It is the first-of-its-kind on the West Coast. With seals starting to use the new platform, a milestone has been reached culminating two-and-a-half years of citizen advocacy to maintain a resting site for harbor seals at Alameda Point. A ferry maintenance facility is slated to begin construction this summer where the seals have been finding solitude for over a decade. The new float will be anchored 300 yards away to the east. 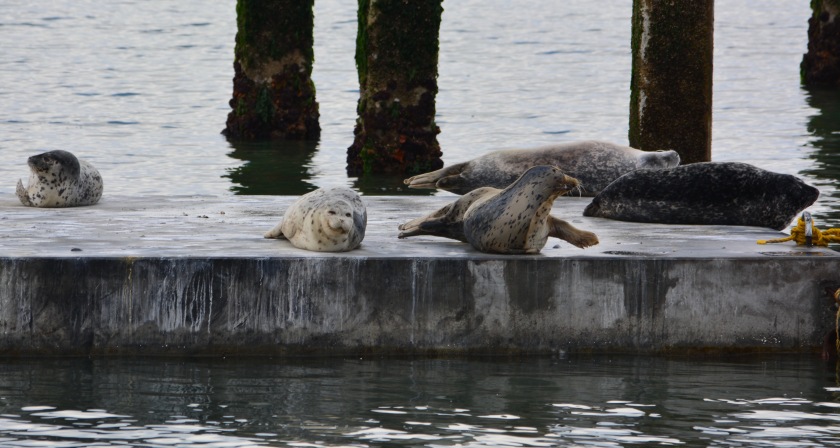 In an effort to acclimate the seals to their new float and surroundings, the float is being moved in stages to its permanent location. It will be anchored a hundred yards offshore from the Bay Trail near the soccer field on West Hornet Avenue. END_OF_DOCUMENT_TOKEN_TO_BE_REPLACED

Three thousand tons of sand was added to the nesting grounds for the least terns at Alameda Point in late February and early March. In the weeks that followed, volunteers from St. George Spirits and the Boy Scouts and Cub Scouts came out to help make the site ready for the arrival of the terns in mid-April.

The Water Emergency Transportation Authority (WETA) paid for enough sand to cover half of the 9.6-acre nesting area with three inches of sand, as well as for grading. The weeklong delivery of sand was a conservation mitigation requirement for the impact that WETA’s new ferry maintenance facility will have on the terns’ feeding area. As many as 12 ferries will make up to four passes per weekday through the Alameda Point Channel where the terns frequently dive for small fish.

Wind and water erosion take their toll on the sand substrate lying atop old airfield taxiway pavement, requiring periodic replenishment. This latest delivery of Angel Island coarse sand has built up the sand depth on much of the site to the point that it’s starting to feel like a real beach underfoot. Beaches are the traditional nesting habitat for terns. END_OF_DOCUMENT_TOKEN_TO_BE_REPLACED

The new residential and commercial developer at Alameda Point has set aside $10 million toward the construction of a passenger ferry terminal at the Seaplane Lagoon. The Bay Area’s ferry agency – the Water Emergency Transportation Authority (WETA) – however, has made it clear there is currently no funding to operate a ferry there.

WETA “will entirely exhaust its available operating subsidies on an annual basis, relying upon projected increases in ridership and fares to cover increasing operating costs for existing services,” stated a draft 10-year Short Range Transit Plan that WETA issued in January for public comment. “WETA’s ability to increase service levels and meet future demand for ferry service will be restricted until new regional or local sources of operating subsidy are secured,” the draft stated.

WETA’s revenue picture is more limited than other regional transit agencies, such as BART. In WETA’s case, half of its operations funding comes from fares. Most of the other half — $15.3 million — comes from bridge tolls through Regional Measure 2, which was passed in 2005 adding a $1 bridge toll. A Harbor Bay parcel assessment funds 10 percent of the Harbor Bay service.  END_OF_DOCUMENT_TOKEN_TO_BE_REPLACED

The Water Emergency Transportation Authority (WETA) is aiming for the delivery of a new dock for harbor seals at Alameda Point as early as April, ahead of the start of construction of its new ferry maintenance facility this summer.

Because the maintenance facility’s new berthing dock would displace the seals’ current resting spot, a provision was approved for a new harbor seal dock as a condition for permitting the new facility. WETA, the city council, and the Bay Conservation and Development Commission (BCDC) approved the provision at the urging of community activists.

WETA issued design specifications for its 12-berth maintenance facility and administrative offices to prospective contractors in December. It expects to award the contract on March 31, with work commencing as soon as May 6. The estimated cost is pegged at $45 million, $9 million of which is for design work and the remaining $36 million going for construction, according to Chad Mason, senior planner at WETA. Funding for the project is coming from federal, state, and regional funds.

The facility will include a 70-foot-tall four-story building and is expected to be complete in 2018.

The project will also fund other benefits, among them, a new water line from Main Street, park enhancements, and sand for the least tern nesting area on the airfield.

WETA will also be providing some assistance for the California least terns, an endangered bird species that nests at Alameda Point and dives for fish in surrounding waters. As a mitigation for the impacts of the new ferry traffic on the terns’ foraging waters, WETA will be delivering enough truckloads of sand to the terns’ nesting area on the airfield in February to add a few inches of depth. Erosion of the 9.6-acre beach-like nesting landscape necessitates periodic replenishment.

The replacement harbor seal dock, also referred to as a haul-out, will be the first time such a structure has been built on San Francisco Bay specifically to retain or attract harbor seals. It will be located a short distance to the east of the old dock. Time will tell whether this experimental effort is successful.

“Meeting the permitting requirements for the new harbor seal haul-out is underway,” said Mason. BCDC is the state permitting agency for all Bay shoreline and in-water projects. It requires assurances from other agencies that the harbor seal dock does not introduce any unwanted environmental impacts before granting approval.

“We are currently reviewing two options for providing the new harbor seal haul-out: Build a new one from scratch, or modify an existing mobile dock if we can find one that meets our needs,” said Mason. “We hope to issue the contract for the haul-out in January.” WETA will be responsible for constructing, maintaining and replacing the harbor seal dock when necessary for the 60-year term of its lease.

WETA has been working with a citizen advisory group of local harbor seal advocates who spearheaded the effort for the new haul-out. The group gained the support of the Sierra Club and the Audubon Society. The location for the new seal dock was chosen with the help of marine mammal expert Dr. Jim Harvey, Director of California State Universities’ Moss Landing Marine Laboratories. 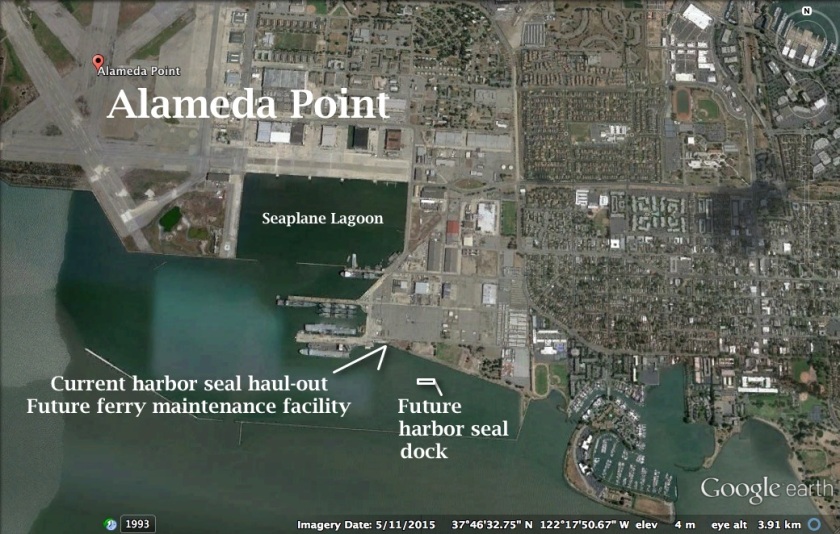 This winter, the seals favor the afternoon for getting out of the water. Their numbers can vary from a dozen to a recent high of over three dozen. It is the only haul-out site in the East Bay between Yerba Buena Island and the marshlands of Fremont and Newark near the Dumbarton Bridge, both of which require watercraft for public viewing access. The seals at Alameda Point can be viewed from the Bay Trail.