On Monday, December 9, 2019, the Planning Board will consider approving changes to the Waterfront Park and Block 11 at Site A at Alameda Point that were previously approved in 2016 “in an effort to reduce escalating construction costs and long term maintenance costs for both the building and the park.”  The City has already granted numerous modifications to the development agreement, with good reasons.  The current request does not merit approval because it would cheapen the waterfront focal point.

Comment #1 – Waterfront Park – The proposed new look of the terraced portion leading down to the waterfront promenade is strikingly less desirable than the already-approved 2016 design.

In 2016, the orientation of the terraces was horizontal. 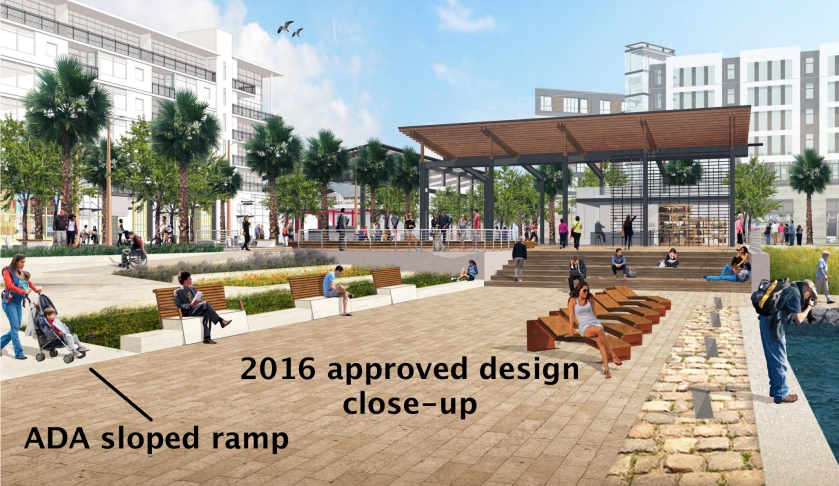 The new design has two diagonal walkways in a “V” shape cutting across the horizontal features and leading to the waterfront.  In 2016, the goal was to “minimize the impression of changes in elevation” as part of a sea level rise design strategy.  The diagonal walkways have the opposite effect.

The proposed design shows two ramps that have been inserted to replace the ADA sloped walkways in the 2016 design.  If anything, it will accentuate the impression of changes in elevation, especially as sea level rises.  Once the promenade at water’s edge is permanently overtopped by water due to sea level rise, the ramps will not be leading to a promenade any longer.  They will be leading to water.  The terraced area will then look like the designer never contemplated sea level rise.  The proposed diagonal walkways mar the clean horizontal and timeless look of the original design and should be rejected.

The January 11, 2016 staff report to the Planning Board on the Waterfront Park design addresses the horizontal aspect.  Under the subheading of Addressing Sea level Rise within the Context of the Historic District Guidelines, the report states, “The waterfront park design maintains the ‘horizontality’ of the space and minimizes the use of walls in order to respect the cultural landscape guidelines.  The sea level rise strategy is designed around a series of short terraces spread over a larger space to minimize the impression of changes in elevation.” (Emphasis added.)

Comment #2 – Waterfront Park – The new design eliminates the extensive seating opportunities on short terrace walls that would invite people into this expansive public space.  This loss of terrace walls is a drastic change and would reduce this park from great to mediocre.

The staff report states, “The revised plan results in changing the amount and types of seating provided in the Waterfront Park.  The previous terrace design provided extensive informal seating as part of the terrace walls.  The removal of the terraces eliminated those seating opportunities.”

The change in design appears to be driven largely by the need to reduce the costs of constructing concrete surfaces, since the staff report references the reduction in hardscape more than once.  The reduction in concrete surfaces comes in part from eliminating the terrace walls.  No figures are given as to what the cost savings will be.  Instead of providing cost-saving numbers, the staff report points to the heat island effect, saying it will be reduced by substituting vegetation for concrete and thereby benefitting the environment.  While this general principle is true, the cumulative benefit for these few square feet is probably not even measurable.

Given the increased amount of natural landscape in the remaining part of the Waterfront Park along the north side of the Seaplane Lagoon and in DePave Park on the west side, the heat island effect is not a compelling reason to lessen the attractiveness and availability of seating.

Saving money on construction of concrete features is likewise not a compelling reason to eliminate seating and lessen the attractiveness of the park.

Comment #3 – Waterfront Park – The proposed changes include eliminating a pump system.  Why was this a good idea in 2016, but now, three years later, it is considered outdated and an undesirable system for handling drainage?  Where were the pumps going to be located, how many, at what cost, with what lifespan, and with what maintenance cost?

Comment #4 – Waterfront Park – While Block 11 is private property, the park is public property.  The funding for this park is in lieu of the purchase of Site A from the city.  Any changes to the park should not be made on the basis of saving money for the developer.  This is a city park.

If memory serves, the city has already given the developer a big break (several million dollars) on their park and recreation commitment by postponing when the contribution of $5 million is due in full for the proposed Sports Complex on the north side of Alameda Point.

Now the developer is asking for a reduction in their park and recreation contribution at the waterfront.  This Waterfront Park is a promised and prominent public amenity that should not suffer changes because the developer’s construction costs are rising.  The city has been very accommodating over the past few years in approving a number of changes to the development agreement requested by the developer, such as the delayed Sports Complex funding, modified construction milestone requirements, and modified construction phasing, but this one should be rejected.

Comment #5 – Waterfront Park – Substituting shade trees for the palm trees in the original plan is a good idea.  Other than that, the proposed changes are a downgrade.  The already-approved 2016 design is a world-class design, grand in scale, inviting to the public, drawing a visitor’s eyes onward through the linear (horizontal) terraced gathering space, regardless of the vantage point.

We should not compromise our public park for short-term savings to a private developer. 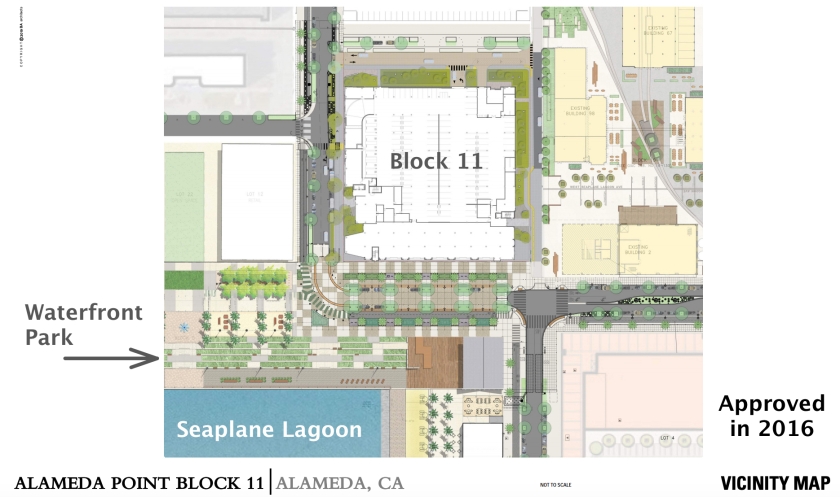 Comment #6 – Block 11 – The developer cites escalating construction costs and long-term maintenance costs as the reasons for seeking a reduction in size of the residential and commercial structure.  Cost figures, however, are not provided to allow for an informed decision.  Additionally, the staff report does not contemplate keeping the building the same size and increasing the number of residential units to offset construction costs.  Why is this alternative not reviewed, especially since it would mean an increase in housing choices, including affordable?

Comment #7 – Block 11 – Due to its prominent waterfront location, this block is supposed to be a character-defining structure.  The already-approved design from 2016 is clearly the superior design when viewed next to each other.

The proposed changes make the building look more like “Anywhere USA.”  And the smaller size and loss of the bold architectural elements in the 2016 design would likely make it an underwhelming presence at the central focal point of the town center. 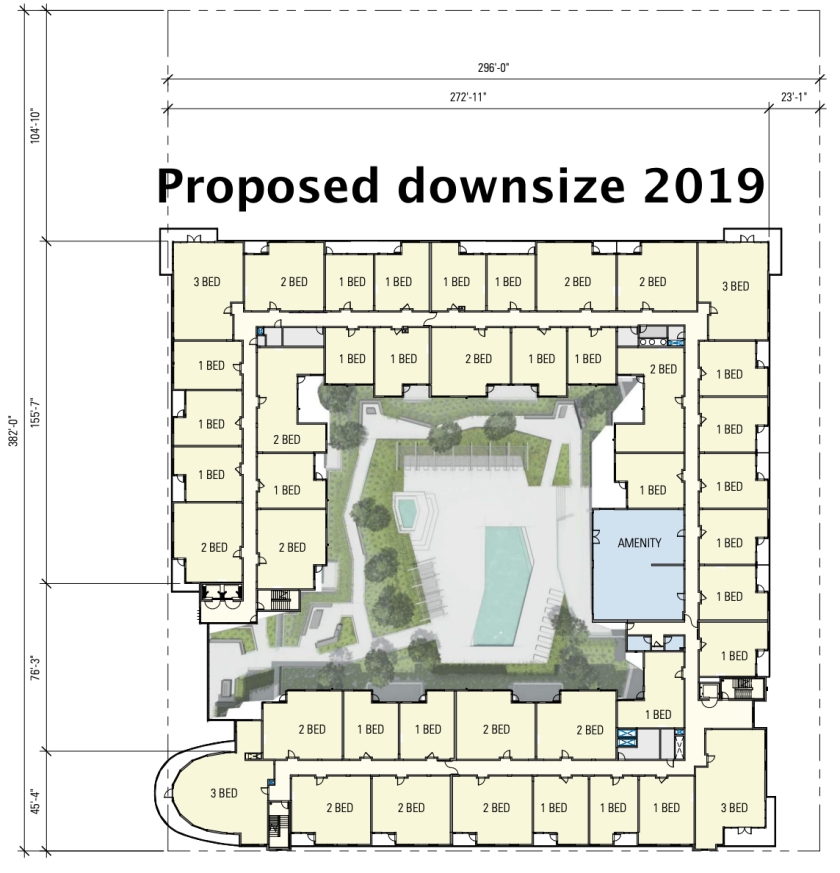 Comment #8 – Block 11 – A side benefit for downsizing the building, suggested by staff, is that it would free up space to build a parking garage.  If a parking garage is someday considered necessary in this vicinity, it should be built over the toxic groundwater plume south of West Atlantic Avenue.  The possibility (no guarantee) of constructing a parking garage next door to Block 11 lacks merit as a reason to approve the requested change in size.

The agenda item is 7-B.  The staff report is here.

Comments can be submitted to the Planning Board by sending them to city staff member Nancy McPeak nmcpeak@alamedaca.gov.

3 thoughts on “Developer proposes changes that would cheapen waterfront area”