Using fuel oil for heating is so yesterday, yet that is exactly what the U.S. Department of Veterans Affairs (VA) plans to use for its heating system at its proposed facilities at Alameda Point.

The heating system for the VA’s medical clinic and offices, as currently proposed, will utilize a boiler system heated by fuel oil.  The VA Project Manager, Kelvin Slaton, recently confirmed that it will be installing an underground fuel oil storage tank for boilers and a backup generator.  Slaton did not respond by press time as to why the VA did not choose a solar-powered electric heat pump.

One reason for not choosing an electric heat pump could be the high electricity demand of heat pumps.  This makes the pumps more costly to operate compared to heating with natural gas or fuel oil.  But the VA has enough land at Alameda Point to set up a small solar facility with battery storage for its own facilities and even sell the excess power.

The VA’s 2013 federal environmental impact report said that its clinic building would be super green, with LEED certification.  LEED stands for Leadership in Energy and Environmental Design.  It would meet this standard in part, said the report, by use of a 90 percent efficiency boiler.  Today, seven years later, it is hard to imagine a project in California in 2020 claiming to be green while burning fuel oil, especially when greener alternatives are available.

The 2013 environmental report gave a token nod to solar power by saying 10 percent of the VA’s electricity demand would be supplied by solar panels on parking lot canopies.  But why stop there when they have so much land and the added upfront costs for solar panels and batteries could be partially offset by selling excess electricity?

The solar facility could be located on the land set aside for an 80-acre columbarium cemetery that will be built in phases over the next 100 years.  The first phase of the cemetery will use 20 acres.  Thereafter, roughly six acres of columbarium niches will be added every 10 years on the remaining 60 acres.  This means, for example, that 36 acres at the far end of the cemetery footprint next to the Bay will not be used for cemetery purposes for the next 40 years.

A 36-acre VA solar facility could produce 6 megawatts of electricity, which is far more than they would need for an electric heat pump and other electrical demands.

Alameda Point has a valuable asset on the old aircraft runway area for converting to a carbon-free economy – both on the federal VA property and on City property.  It is time to make use of this asset to meet city, state and international climate-action goals. 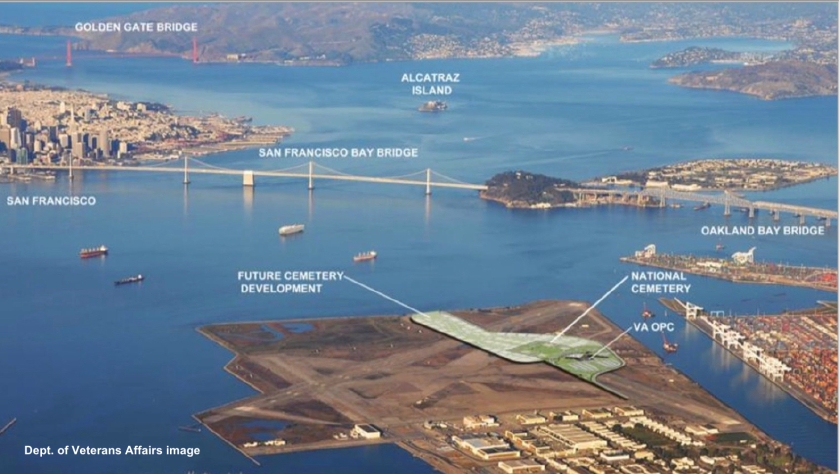 There is currently, and for the foreseeable future, not enough carbon-free electricity available for every community to be 100 percent green like Alameda.  The more we produce locally, the more we help our neighbors.

There are additional reasons for local solar.  Every acre in an urban area used for solar is one less acre of desert that is disturbed by a solar farm.  And it avoids increasingly expensive transmission costs and power lost during transmission from far away desert facilities.

A VA solar facility would be a reliable round-the-clock energy source by adding battery storage, which would allow the medical facilities to operate even during power outages.

In 2019, the City of Alameda adopted a Climate Action and Resiliency Plan.   The City also passed a local Climate Emergency declaration  in 2019, which said in part:

City of Alameda joins a nationwide call for a regional just transition away from fossil fuels and urgent climate mobilization collaborative effort focused on transforming our region, enacting policies that dramatically reduce heat-trapping emissions, and rapidly catalyzing a mobilization at all levels of government to restore a safe climate;

Alameda Municipal Power should consider partnering with the VA for a solar future.  There is still time for the VA to go carbon free.