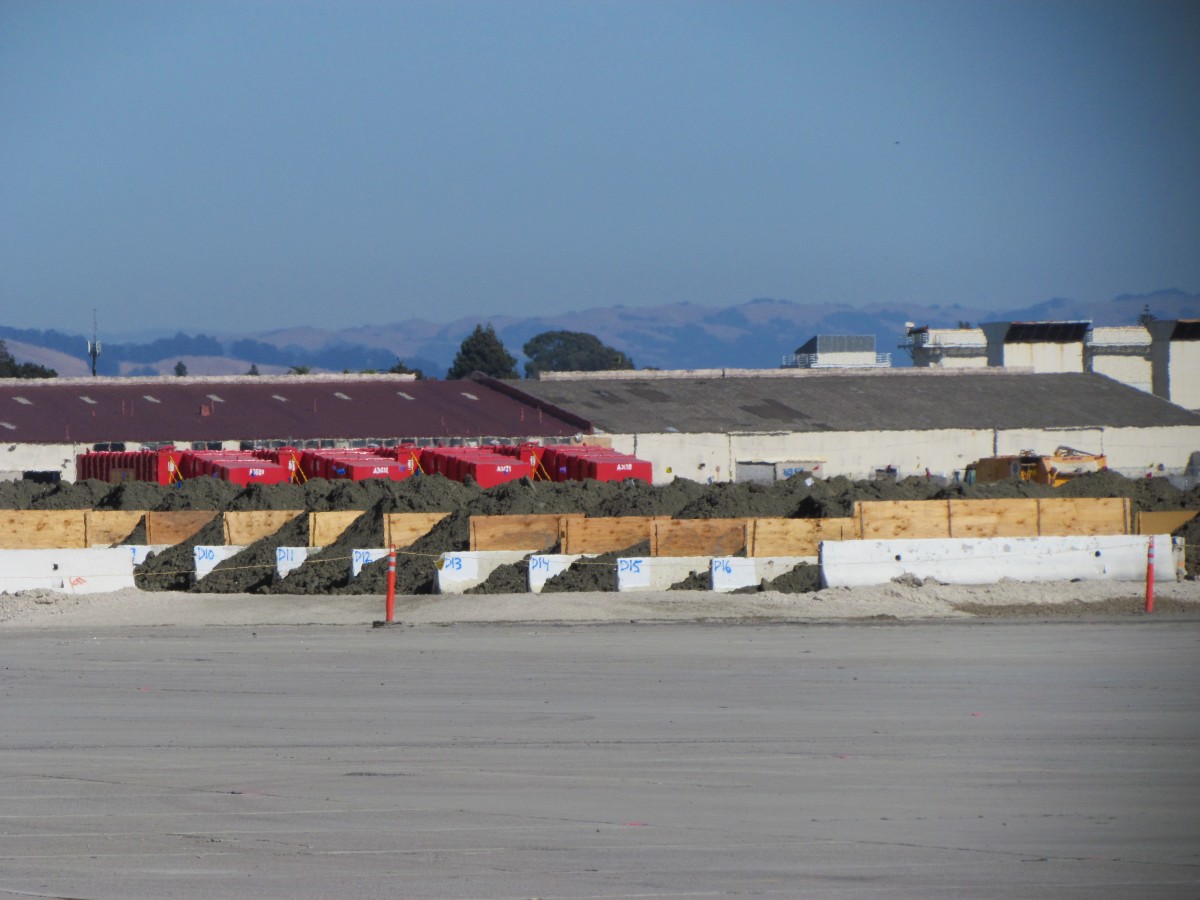 Radioactive radium waste not an issue  The massive pile of dredge mud that has been sitting between the Seaplane Lagoon and the hangars is now dry enough to be tested to determine the exact contaminant profile and hauled away.

The contaminant of greatest concern to community has been radium-226, the radioactive ingredient once used to make aircraft dials glow in the dark.  Testing revealed that the sediment did not contain elevated radium levels and therefore would not need to be disposed of at a special radioactive waste site.  There were several solid objects, referred to as “buttons,” that were found which contained elevated radium.  Those objects and the surrounding soil were removed for special disposal.

The piles of dredge soil neatly arranged and numbered next to the old Control Tower are waiting to be hauled away to a hazardous waste disposal site.

In addition to trucking dredge soil to a hazardous waste site, there is a large mound of asphalt that is being trucked onto the wildlife refuge and out to an area where clean soil and fill material is being stored for future use.  This asphalt is from a temporary pad that the Navy laid down in the dredge soil dewatering area.  It was covered with plastic and not contaminated, and now it is no longer needed.

Early this year the Navy began its dredging project to remove contaminated sediment from the northeast and northwest corners of the Seaplane Lagoon. The Seaplane Lagoon ranked as one of the worst PCB sites in the Bay Area according to a regional Water Board study.  The two areas became contaminated with chemicals like PCBs, cadmium, and pesticides that were disposed of through the sewer drains that emptied into the lagoon. The sewer drain system that once carried these chemicals was removed and replaced last year.

The Navy’s target completion date for the entire dredging operation was the end of March of this year prior to the arrival of the endangered California Least Terns.  They nest at Alameda Point and feed in the lagoon waters, and disturbing them is prohibited.  The contractor was unable to meet the deadline, and work was halted just as they completed the northeast corner.

A new dredging company will resume the dredging operation on the northwest corner of the lagoon in early 2012 and complete the operation before the Least Terns come back in April.