The US Department of Veterans Affairs (VA) received a green light from the US Fish & Wildlife Service (Fish & Wildlife) for their Alameda Point clinic and national cemetery project in late August.  Fish & Wildlife issued its biological opinion, which focuses only on the impacts to the least tern colony that nest on the previously proposed wildlife refuge.  While they agreed with the VA that the project would adversely affect the least tern, they concluded their review by saying the tern colony’s existence is not placed in jeopardy by the plans.

The opinion includes a description of the VA’s planned uses for the 511 acres, labeled “VA Undeveloped Area,” that will not be used for the clinic or cemetery.  The description makes clear for the first time that the national wildlife refuge envisioned by Fish & Wildlife in 1998 is dead.  Other than the 9.7-acre nesting area for the terns, the remainder of the tarmac, taxiway, and runway pavement will be used for emergency training exercises during the non-nesting season (August 16 – March 31), and set aside to be used as a staging area during emergencies and natural disasters.  Two ammo bunkers will be used to store emergency supplies.

The VA has been working with the Navy since 2005 to take over the proposed 549-acre wildlife refuge.  Previous talks between Fish & Wildlife and the Navy ended over disagreements about environmental cleanup.

A colony of the endangered California Least Terns has been nesting here for decades.  The VA’s project stalled last year over proximity to the tern nesting site, but was revived when a compromise plan emerged that will move the clinic facilities and part of the cemetery northward away from the terns.  Due to the terns’ status as an endangered species, the VA needed clearance from Fish & Wildlife for their project to proceed.

Another indicator of the downgrade from wildlife refuge to surplus land with a small bird sanctuary is the amount of parking for the VA’s Conservation Management Office – the Nature Center – to be built next to their clinic.  It will have ten parking spaces.  In contrast, the 1998 Fish & Wildlife plan for a national wildlife refuge included visitor projections that ranged from a low of 46,000 to a high of 113,000 annually.

Fish & Wildlife’s funding projections in 1998 dollars were $848,000 for initial capital costs, and $299,000 per year for full staffing.  The Fish & Wildlife refuge plan called for wetland restoration, screened observation platforms for viewing and photographing wildlife in the wetland area, improving habitat quality for songbirds, and removal of non-native grasses.

Photo above shows weeds killed with herbicide.  Eliminating weed growth in areas like this one to the southeast of the nesting site creates an important roosting area for adult terns and for their chicks learning to fly.  This area is favored by the terns because of proximity to the nearby water in the Alameda Point Channel.  Areas to the far west and north of the nesting area, on the other hand, are poor candidates for weed removal and better candidates for grassland establishment.  New grassland is not part of the plan for managing this area.

The VA’s plans call for removing the mostly non-native grasses that have grown between the hundreds of pavement slabs.  Herbicides and sealing the pavement cracks are listed as options.  They have no plans to eliminate the pervasive non-native ice plant or to plant native grasses.  Grasslands in the outlying areas of the refuge can provide habitat for prey species like small rodents that would be attractive to birds like hawks that might otherwise focus on the nesting terns for a food source.  Wild grasses are also used for shelter and foraging by common visitors like the killdeer, a shorebird that spends its time on the ground. 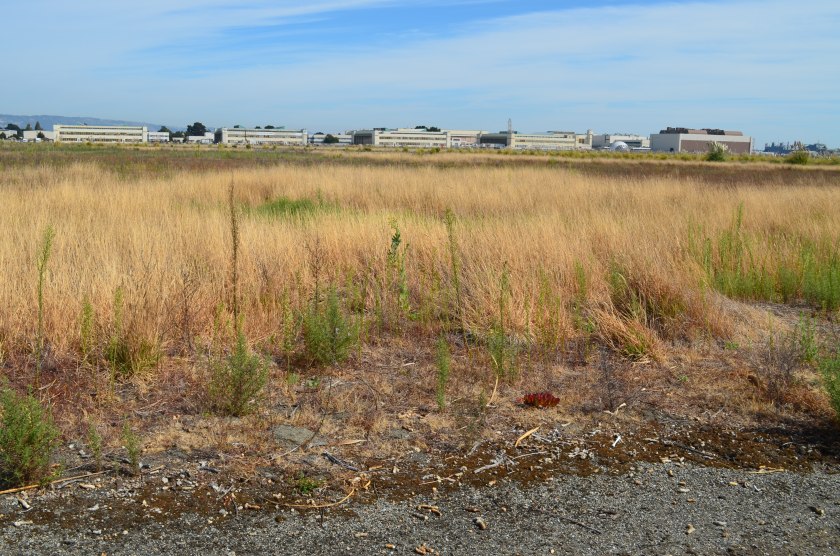 Above:  Pockets of grassland on the the far west and north parts of the wildlife refuge offer ideal habitat for prey species that would relieve pressure on the tern colony from avian predators like hawks.  Areas in between these grassland pockets are covered with pavement that would better serve the terns’ welfare if it were removed and converted to grassland.  Much of the remnant pavement is significantly farther away from the tern colony nesting site than the aircraft hangars.

The land transfer is expected to take place next year after other environmental documents are approved.  The City of Alameda will have to approve the change in location for the VA project.  The city is currently slated to receive the 220-acre area on the northwest part of the runway area along the Oakland Estuary – the Northwest Territories – where the VA clinic and part of the cemetery are planned.

Alameda’s city council must approve an amendment to the no-cost conveyance agreement with the Navy signed last year.  This will allow the Navy to keep 70 acres of the Northwest Territories that it will then include in the Navy-to-VA transfer.  Approval of the land transfer by the city council without conditions for establishment of a wildlife refuge will effectively amend the community reuse plan adopted in 1996.

A shorter version of this story was first published in the Alameda Sun. 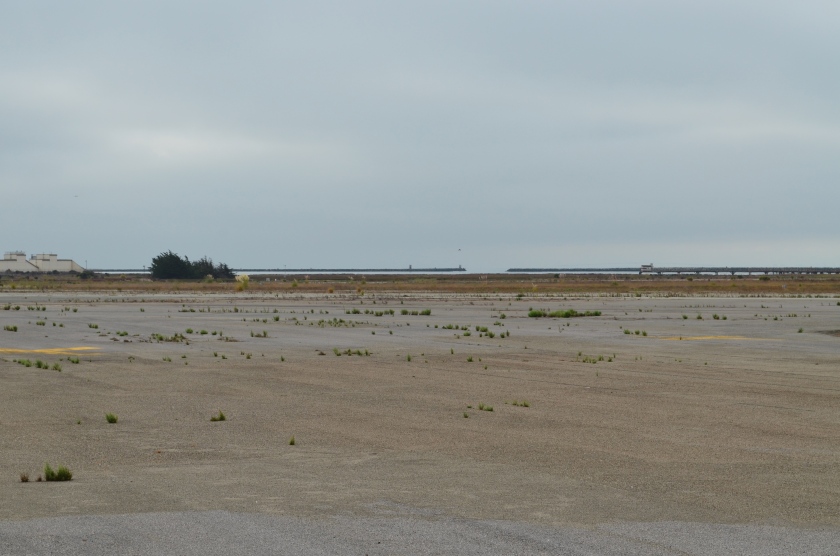 Above is a typical view of the vegetation-free zone around the tern nesting site.  This view is looking southeast toward the Alameda Point Channel.  Beyond the cleared pavement is the area shown in the article above with all the weeds killed.

Photo above shows taxiway next to grassland in north part of wildlife refuge.  Instead of removing weeds between pavement cracks, the pavement itself should be removed and a contiguous band of grassland established for predators to hunt in.  A mismatched hodgepodge landscape is not scientific wildlife or ecosystem management. 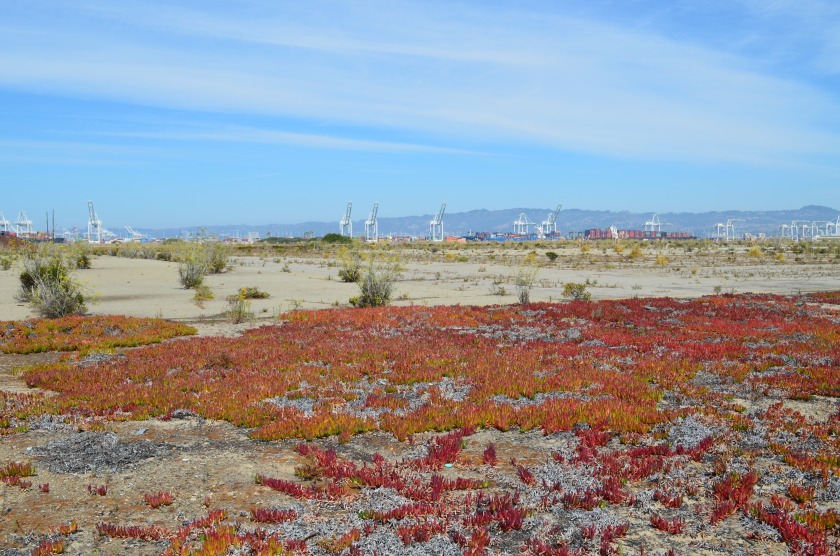 Hodgepodge landscape such as the above in the far western area of the wildlife refuge is not helping the terns to thrive.  The ice plant does not offer the habitat quality that grasslands would offer.  And the adjacent patchwork of pavement does little if anything to simulate a beach habitat favored by the terns for nesting.  Grasslands here would do more to help the terns by providing prey for avian predators than by leaving it as is.  Leaving this amount of pavement to capture heat rather than capture carbon is at odds with climate change science.  This particular area is only a stone’s throw away from the water and could easily accommodate pockets of wetland supplied by water via an open culvert. 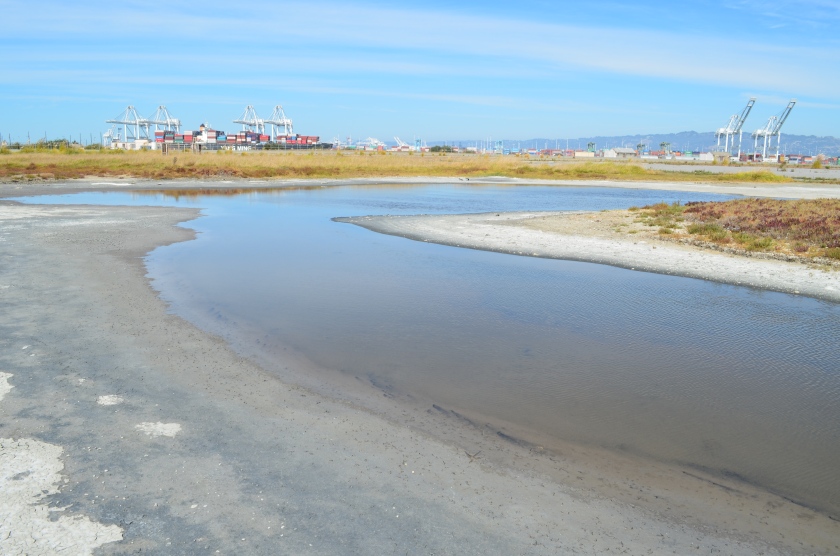 This wetland in the above photo is on the interior of the wildlife refuge.  It is not seasonal – it’s permanent.  This photo was taken on September 16, 2012 when all seasonal wetlands on the refuge and adjacent Northwest Territories were completely dry.  The water source can only be from the Bay via the tide.  The VA’s columbarium cemetery footprint currently includes this wetland, which is not officially mapped as a wetland.

This stand of willows above is a favorite area for songbirds.  It may be compromised or completely removed for construction of the VA clinic.

The photo above shows the Runway Wetland at the southeast corner of the wildlife refuge in mid-September 2012.  This area looks like a small lake during most of the year.  The southern edge of this wetland comes within 20 feet of the Alameda Point Channel and could easily become a year-round wetland if an open culvert were created in the seawall.  No plans for such environmental enhancements are likely to emerge for land that is labeled “VA Undeveloped Area.”  Not one additional acre of wetland is being suggested for the area formerly known as the wildlife refuge – a failing grade in environmental stewardship.

Killdeer love the wildlife refuge and the habitat shown in the photo above.  Only about a dozen pair nest here, but for reasons not entirely clear, between one hundred and two hundred killdeer arrive in the winter and can be seen roosting on the tarmac area.  Killing all vegetation between the pavement slabs would destroy valuable bird habitat.