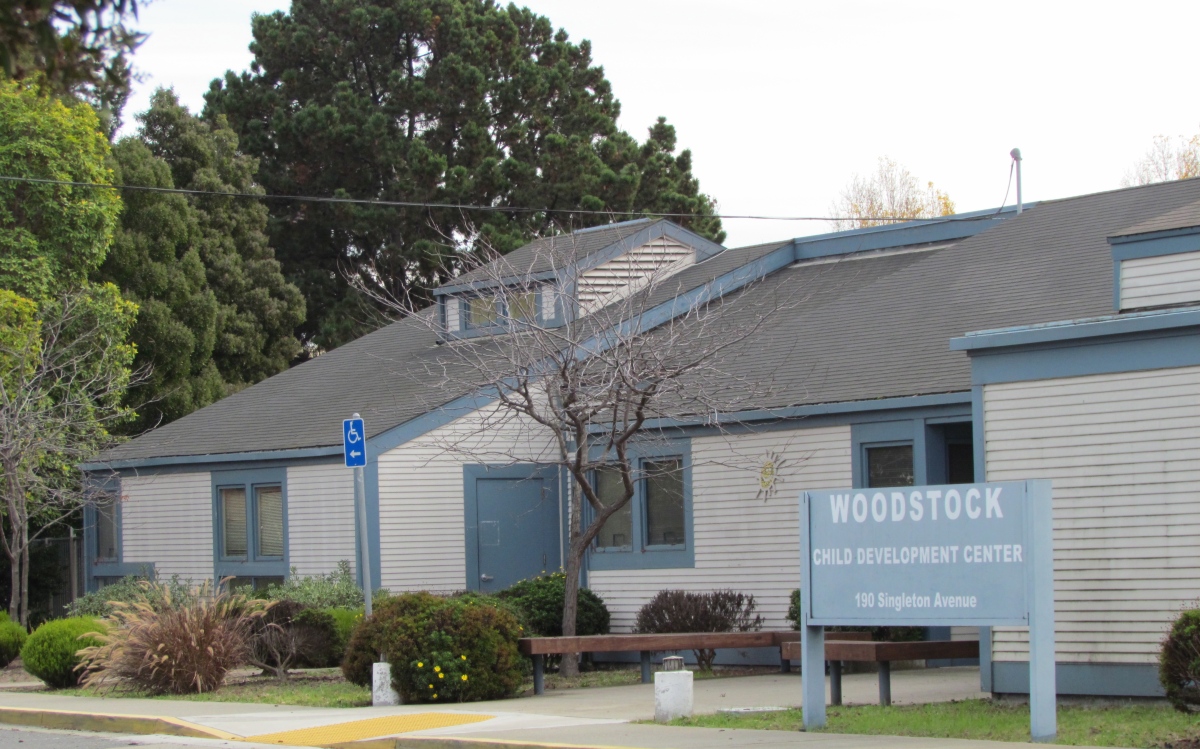 A Case Study in How the Cleanup Process Works

In November of 2008, after years of testing, evaluation, and one emergency soil removal action, the Navy issued the final report on what to do in the area where Island High School and Woodstock Child Development Center are located.  The area is designated Installation Restoration (IR) Site 30. The Navy’s conclusion, or proposed plan, was that no further action is required.

The following description of the process is taken from the Navy’s 2008 report and proposed plan.  It serves as a case study in how the cleanup process is conducted with regard to soil. Highlighted terms are defined in the “Cleanup Glossary” located on the tab bar above.

The remedial investigation (RI), which included the environmental investigation and technical investigations, was conducted in accordance with the governing federal regulation known as the Comprehensive Environmental Response, Compensation, and Liability Act (CERCLA). The RI evaluated the nature and extent of potential contaminants in the soil and the risk to current and future receptors (humans and animals).

Based on the RI evaluations, the soil does not present an unacceptable risk to human health or the environment under the current or future conditions. No land-use restrictions, environmental monitoring, or other cleanup actions are required at this site for soil. The RI also concluded that the soil at IR Site 30 is not a source of benzene and naphthalene in the Operable Unit 5/ IR-02 groundwater plume, which lies beneath IR Site 30 and is being addressed separately.

The Proposed Plan summarizes information detailed in the RI report (October 2005) and Addendum (July 2008).  A final official decision, documented in the Record of Decision (ROD), was made after completion of the public comment period.

IR Site 30 is a 6.6-acre site located in the northwestern portion of the former San Francisco Bay Airdrome property, which was an airfield that was operational from 1929 to 1941, before the Navy arrived. By 1947, the site was used for military housing; by 1959, the site was paved and used for storage. In 1975, the high school was constructed and in 1985, the child development center was built.

In 2004, one area of this site was deemed to pose an immediate threat to health and was cleaned up immediately under what is known as a Time-Critical Removal Action (TCRA). 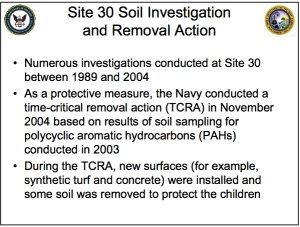 The RI report evaluated the nature and extent of potential chemicals of concern in the soil and included human health and ecological risk assessments. The investigation also evaluated the shallow groundwater beneath IR Site 30 to determine whether the soil at the Site has contributed to a potential release of contamination to groundwater. The RI evaluations incorporated data from previous soil and groundwater investigations. The 2005 RI report calculated risk and HI numbers based on pre-TCRA data, so the assessment of risk is conservative. The human health and ecological risk assessments are summarized in subsequent sections.

A Brief Summary of Remedial Investigations – VOCs, SVOCs (other than polycyclic aromatic hydrocarbons [PAHs]), pesticides, and PCBs were detected infrequently in the soil (in 15 percent or fewer of samples) and at concentrations lower than levels established by the regulatory agencies for residential use, except for PCBs at one location where the soil was subsequently removed. Because a school and daycare center are located on this IR site, the Navy conducted a TCRA in 2004 as a protective measure until the remedial investigation and associated human health and ecological risk assessments could be completed. During the TCRA in November 2004, soil cover materials were installed in six areas at the site. Also, soil at one location was removed to 2 feet below ground surface because of elevated concentrations of several organic compounds, including PCBs and metals. The surface was then restored to pre-removal action conditions.

The RI report identified arsenic as the cancer risk driver. Subsequently, in an Addendum to the RI report, an in-depth statistical analysis of arsenic in the soil showed that arsenic was ambient (naturally occurring), and not the result of a release to the environment from Navy activities.

The groundwater investigation determined that no site-specific releases of VOCs, SVOCs, PCBs, pesticides, metals, or PAHs had occurred here. The investigation also evaluated benzene and naphthalene, the chemicals present in the OU 5/IR-02 groundwater plume, and concluded that no site-specific releases had occurred and that the soil at IR Site 30 was not a source of these chemicals in the groundwater plume. 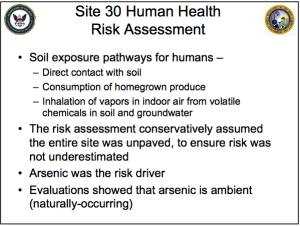 Risk assessments are designed to provide a margin of safety to protect public health and the environment by using conservative assumptions that assure risks are not underestimated. Actual human exposures and associated risks are likely to be lower than those calculated for the risk assessment. Therefore, health risk estimates do not predict actual health effects, but are a tool for making risk management decisions on the need for action to reduce possible exposure.

A human health risk assessment was performed for IR Site 30 as part of the RI evaluation. The Navy used EPA guidance to evaluate the different ways in which people could be exposed to the chemicals in soil, possible concentrations of the chemicals that potentially could be encountered in those exposures, and the potential frequency and duration of exposure. Exposure pathways for children and adults at IR Site 30 are shown in Table 1. 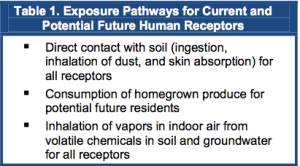 These exposure pathways are based on current and reasonable future exposure scenarios. To account for uncertainty, and to be representative, the risk calculations used statistical methods and a reasonable maximum exposure (RME) to assure that risks are not underestimated. This risk assessment included inhalation of vapors in indoor air from volatile chemicals in groundwater for all receptors, but not ingestion of groundwater. Groundwater beneath IR Site 30 is not used for drinking water. Water services to the school and child care center are provided by the East Bay Municipal Utility District. Groundwater at IR Site 30 is within the Operable Unit 5/IR-02 plume and is part of a separate remedial action.

As part of the CERCLA risk assessment process, ambient metals are included in the calculation of total risk. An in- depth statistical analysis of potential site-related arsenic in the RI Addendum showed that this metal was ambient (naturally occurring), and was not the result of a release to the environment from Navy activities. Therefore, risks were also calculated without arsenic.

For noncancer effects, an HQ is calculated. An HQ of 1 or greater indicates that a lifetime of exposure may have potential for causing adverse health effects. The HQ is based upon effects of a single chemical. To express health effects for multiple chemicals, the HQs are added together to obtain the hazard index (HI).

In accordance with CERCLA rules defined in the National Oil and Hazardous Substances Pollution Contingency Plan (NCP), site-specific factors including exposure factors, uncertainty, and other technical site-specific information were evaluated during the risk management decision-making process. The estimated risks associated with soil for IR Site 30 have a high level of confidence based upon numerous soil samples (more than 400) and the evaluation of comprehensive exposures. For potential future residents, the evaluation included ingestion of soil for 350 days per year for 30 years and ingestion of home-grown produce.

Because of the high confidence level in the risk values, extensive site characterization, and other site-specific factors, risks within the risk management range are protective of human health at IR Site 30. Most of the potential noncancer hazard was associated with the contaminant concentrations in a single soil sample, which was removed during the TCRA. This sample contained elevated concentrations of PCBs, metals, and other organic compounds.

Therefore, the human health risk assessment concluded that there are no unacceptable risks for soil at IR Site 30.

Table 2 below shows the post-TCRA cancer risks for IR Site 30 soil with and without the inclusion of arsenic. As shown in this table, the risks are within the risk management range, and current conditions are protective for adults and children.

The ecological risk assessment presented in the RI report was conducted following EPA and Navy guidelines to estimate potential risk for adverse effects from chemicals to ecological receptors at IR Site 30. Ecological receptors include birds and small mammals; however, no native habitat is present at the site.

Most of the site is paved or covered by buildings and an urban habitat consisting of ornamental shrubs, trees, and landscaped areas are present. The current and future use of the site as a school facility will maintain the urban habitat of the area.

Results of the human health and ecological risk assessments show that soil does not pose an unacceptable risk to human health or the environment. Additional information on the evaluation of IR Site 30 can be found in the RI report and Addendum, which are available for public review at the information repository at City Hall West.

No further action for soil at IR Site 30 is proposed for the following reasons:

 There is no evidence of a release of hazardous substances related to Navy activities based on evaluation of current site data.

 There is no evidence that the soil at the site has contributed to a release to groundwater, and groundwater is being addressed in the Operable Unit 5/IR-02 groundwater remedial program.