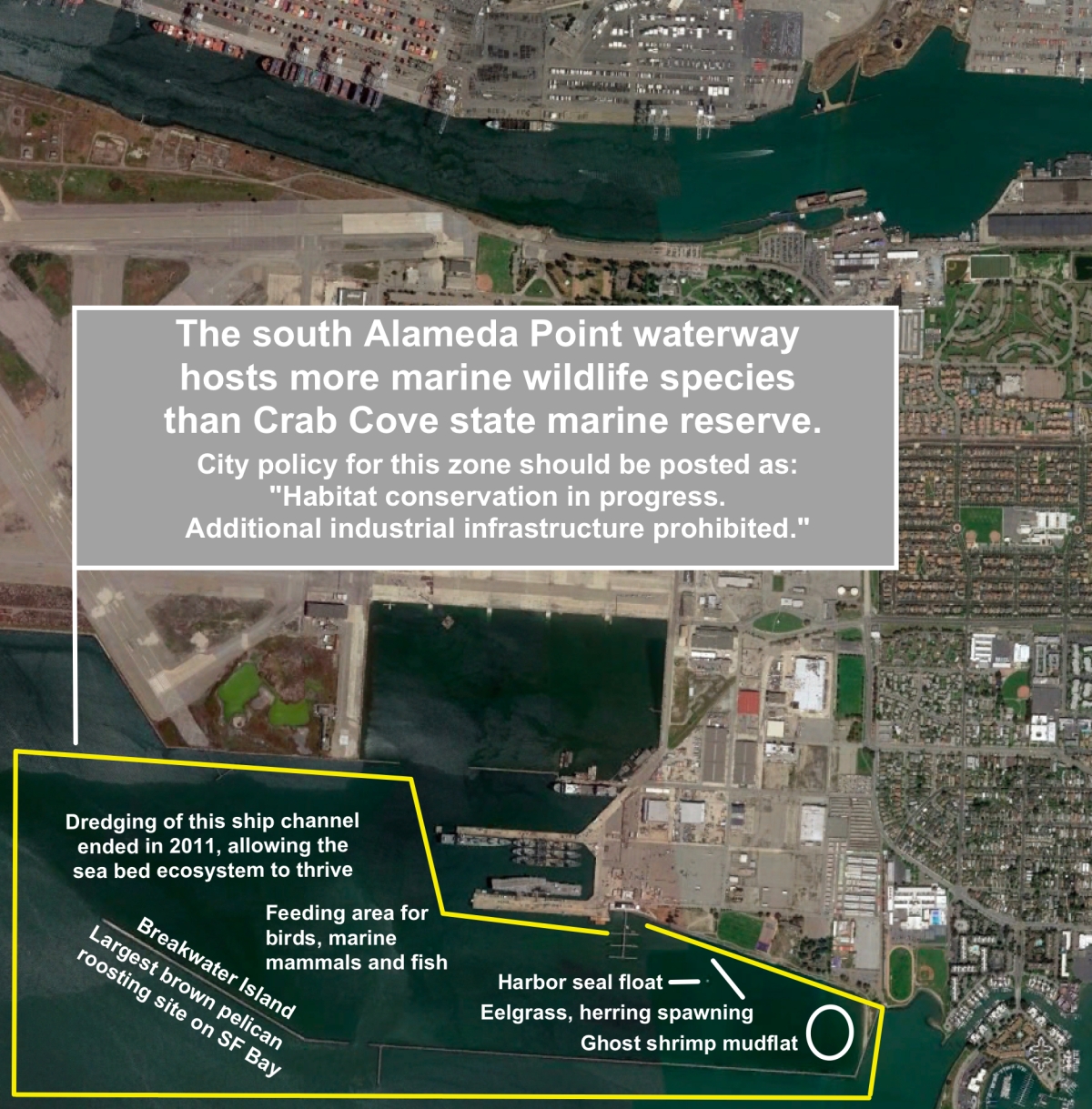 The Alameda City Council has granted you approval of moving forward with your data storage facility at Alameda Point.  Please reconsider the route for discharging warm water from the cooling system.  Instead of heading south under the Bay Trail and through the harbor near the ferry maintenance facility, send the water discharge pipe north to the Oakland Estuary.

As someone who was instrumental in protecting large tracts of the Pacific Ocean during your tenure as environmental advisor to President George W. Bush, I believe the alternative route will appeal to your marine conservation values.

You may not be aware of the environmental attributes of the waterway on the south side of Alameda Point.  I think when you know more, you will agree that further industrializing of this ecosystem with a discharge pipe is the wrong direction (both figuratively and literally).  This area should instead be given some type of marine conservation status and left alone in its natural state.  See my story and photos on my blog post, “Marine ecosystem thrives at Alameda Point.”  The story also appeared in the Alameda Sun as “Marine life offers valuable lessons.”   This waterway should be treasured for its conservation value, not its industrial value.

A superior alternative discharge route, in my opinion, is under Main Street to the Oakland Estuary next to the Dog Park.  The estuary is already heavily industrialized.  While this alternative would more than double the length of the discharge trench, it would ease the permitting burden significantly. 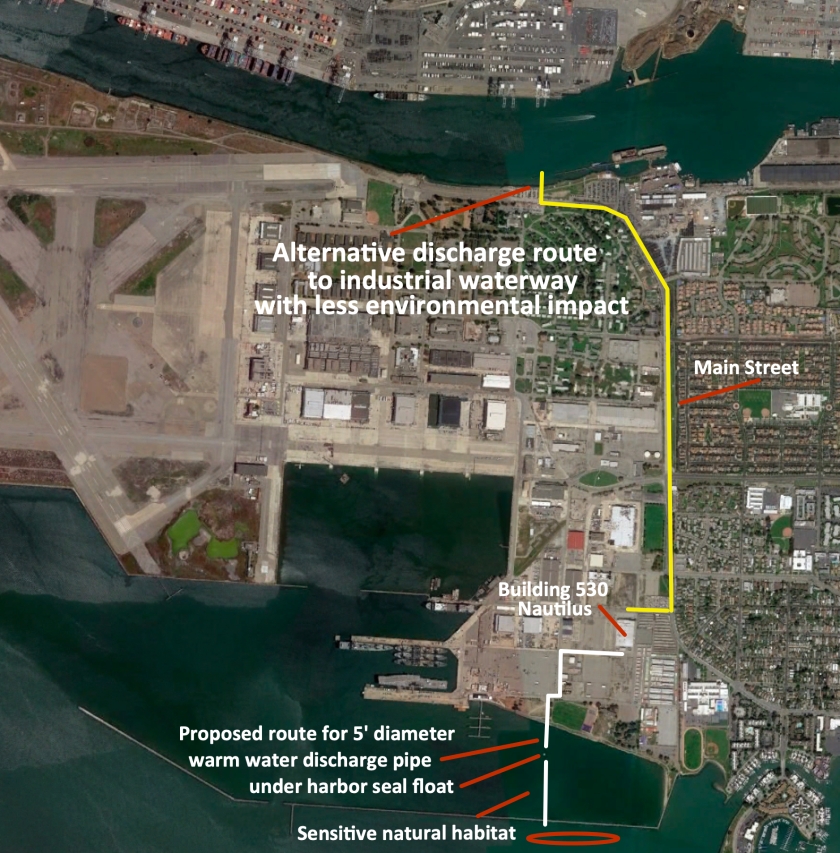 The Main Street route would have these 10 benefits:

1) No permit required from the Bay Conservation and Development Commission (BCDC) for adding fill to the Bay. The currently proposed discharge route would have the pipe laid on the sea bed of the harbor.

2) No permit required from the U.S. Army Corps of Engineers (USACE), if indeed it would even be granted, for introducing a navigation hazard into the harbor with the discharge pipe. The lowest tide level in the harbor is seven feet.  With a five-foot-diameter pipe, that leaves only two feet of clearance.  This is a navigable waterway that any watercraft is allowed into.

3) No permit would be required from the National Marine Fisheries Service (NMFS) or BCDC for disturbing the harbor seals. The current proposal to run the discharge pipe underneath the harbor seal float is not practical – the draft of the float is two feet, meaning it would hit the pipe at lowest tide.  Moving the float or otherwise disturbing the seals during construction would be problematic.

4) No permit would be required from NMFS or BCDC for disturbing an eelgrass bed and herring spawning area where the pipe is proposed to run, if one could even be granted.

5) No permit would be required from the Water Emergency Transportation Authority, the ferry agency, that owns the harbor seal float.

7) No BCDC or USACE permitting required, and no engineering expense, for the proposed pipe culvert through the rock wall jetty for discharging into the Bay. The base of the jetty is 36 feet wide.  This would be a very expensive project.

8) No permit required from BCDC or the East Bay Regional Park District for closing the Bay Trail to dig a trench for the discharge pipe.

9) Distance to the discharge outfall at the Oakland Estuary would further reduce the water temperature and greatly allay fears of a harmful algae bloom triggered by warm water.

10) The environmental impact report for the water intake and discharge system would be much shorter by avoiding all of the above-mentioned impacts. 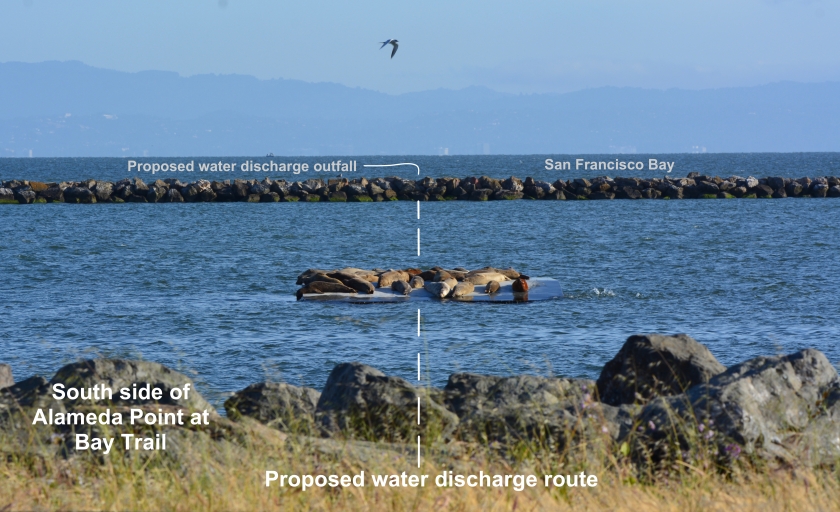 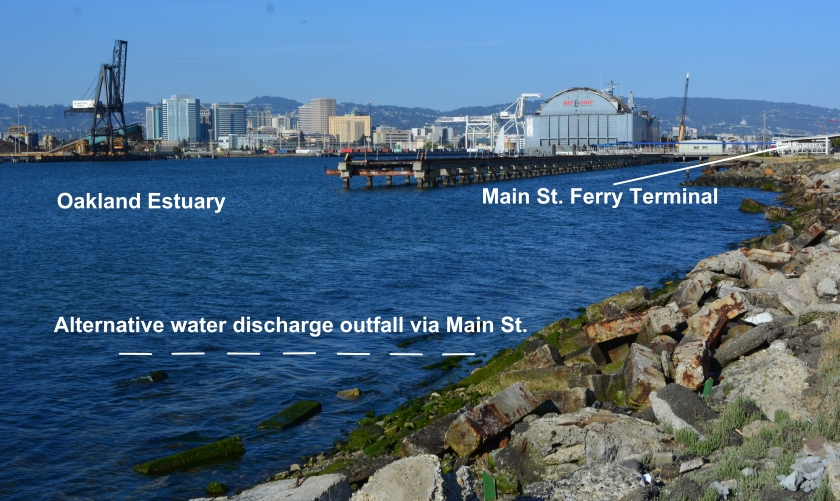 I appeal to you to amend your lease proposal to the city and choose the more environmentally friendly discharge route under Main Street. 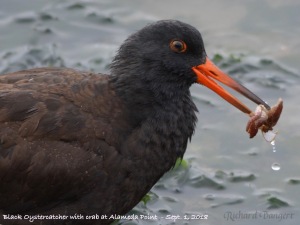