Bottlenose dolphins do not usually come to mind when thinking of wildlife at Alameda Point.  In fact, only three have been observed there in recent years, and those sightings were from canoes and kayaks.  But on July 24, two more dolphins were observed with two regulars meandering around next to Breakwater Island.  The standalone rock wall, or breakwater, is visible from Pier 3 where the USS Hornet Museum is berthed. 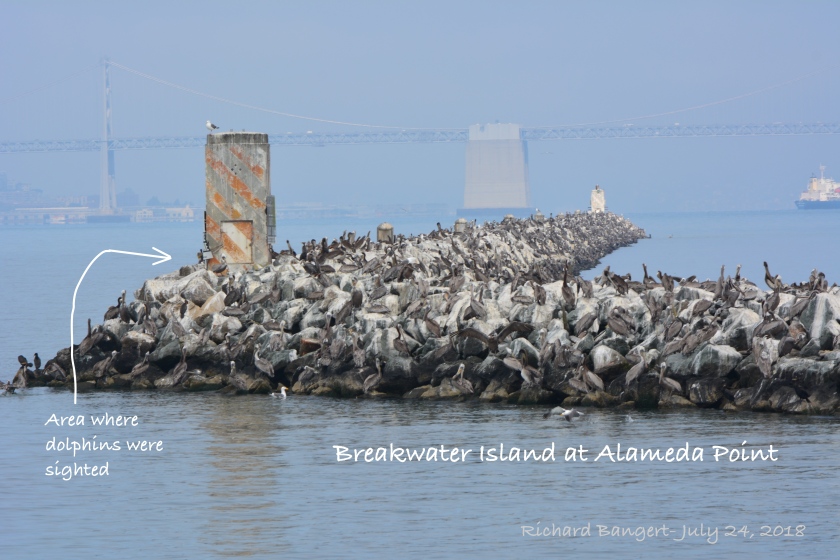 The first-time visitors were from Monterey Bay and identified by researchers with Golden Gate Cetacean Research (GGCR).  The group tracks the dolphins using a catalog of 91 dolphins showing individual markings, some with names.

The newcomer dolphins, named Coffeemate and Big Sur, were identified by markings on their dorsal fins that include notches in the back of the fin, possibly caused by shark bites, and scars.  “They are hanging out with Arc, the adult female that has been a resident in the bay for a couple of years,” said Bill Keener with GGCR.  The fourth dolphin was likely Kaimi, a dolphin seen by members of Alameda’s outrigger canoe center for the past two years, according to Keener.

Bottlenose dolphins began appearing in San Francisco Bay around 2008.  “There were no coastal bottlenose dolphins in Northern California before 1983,” said Keener.  “That’s when a big El Nino brought them north with warm water.  They stayed in Monterey Bay even after the water cooled down, and since then they have moved slowly north.  They can go back and forth from Monterey Bay – it’s only a day or two away for them,” Keener explained.

This particular population of coastal dolphins, which only number about 500-600, now has an extensive range, reaching from Southern California to the Marin and Sonoma coast.  “We believe the primary reason they move along the coast is that they are always on the lookout for new resources – meaning food,” Keener said.

It’s still too soon to tell whether the changing climate is influencing the northward movement of the dolphins, according to Keener.  This is one of the possible correlations that the cetacean research group is studying.

Bottlenose dolphins can live up to 50 years.  They range in length from 8 to 11 feet and weigh between 300 and 500 lbs.  Calves can remain with the mother for three or four years.  Their conservation status is “vulnerable but not endangered.”  Dolphins can be distinguished from porpoises by being larger and having taller more curved dorsal fins.  A porpoise dorsal fin is the shape of a triangle.

Citizen scientists are encouraged to send reports of sightings of bottlenose dolphins and harbor porpoises to GGCR.  Details are on their website at http://www.ggcetacean.org/.  They are particularly interested in sightings of dolphins from Half Moon Bay north.  Photos of the dorsal fin will help identify and track the dolphins’ behavior. 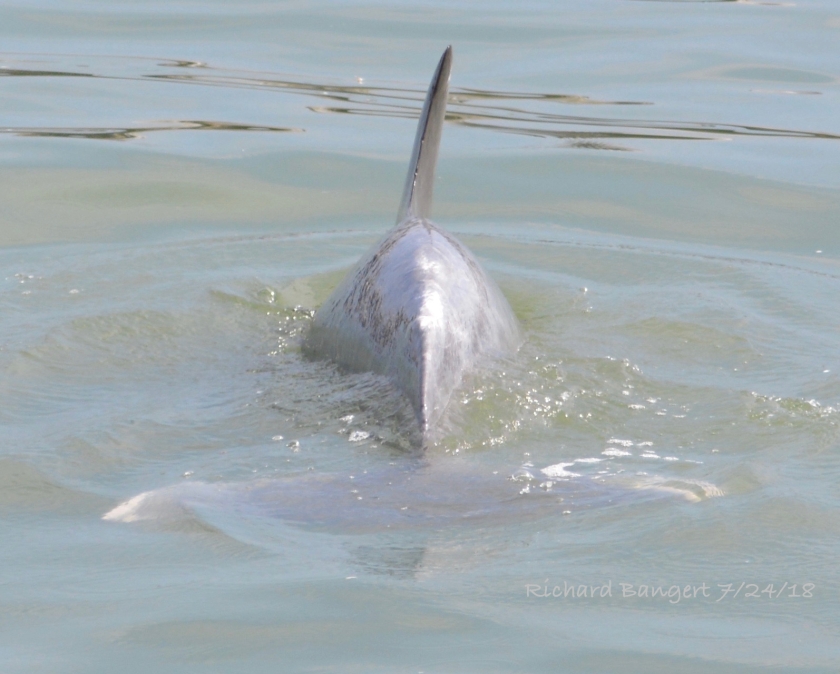