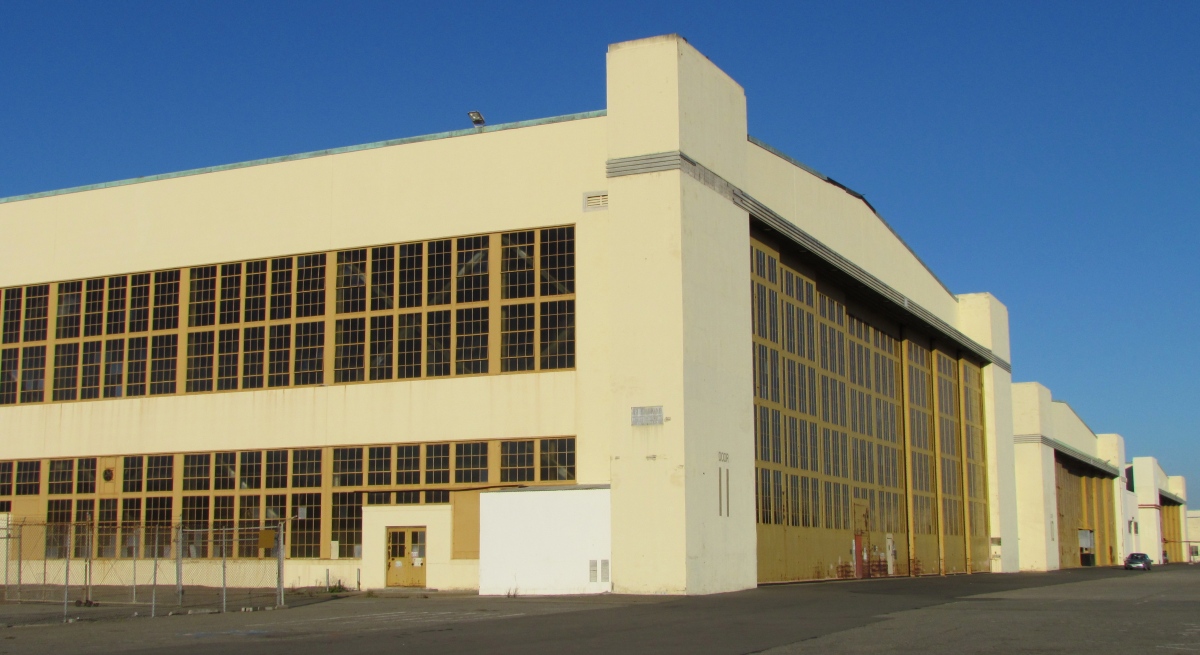 Up until passage of the Clean Water Act in 1972, it was common practice to dispose of chemicals by dumping them down sewer and storm drain lines that drained into the nearest surface water.  Many people did this in their homes.

At Alameda’s former Naval Air Station the worst legacy of this practice was in the drain lines leading out of the massive Building 5 and nearby Building 400.  Building 5 is where the radioactive paint with radium-226 was used to paint aircraft dials and markers.

of thousands of feet of the most seriously contaminated lines leading to the Seaplane Lagoon.  But questions remained for Restoration Advisory Board (RAB) members about drain lines leading north to the Oakland Estuary and also the Industrial Waste Line that was installed after passage of the Clean Water Act.

The RAB heard a presentation at the September meeting about the Navy’s recent examination of all the remaining drain lines using cameras and sampling equipment.  The drain lines lead out of Building 5 and are part of the cleanup area known as Operating Unit-2C.  Three of the storm drains and the industrial waste line were found to have areas of elevated radium, although nothing close to the levels found in the lagoon drains that were removed last year.  Six alternatives for dealing with the problem, from no action to complete removal ($58 million), were presented.  Two hundred ninety-seven samples were collected.

Industrial Waste Line Should Not Be Left in Place – The majority of the RAB favored the option that prescribed hydro-jet cleaning, limited excavation and disposal of storm drain lines, and complete removal of the Industrial Waste Line.  Concern was raised about two alternatives that allowed the Industrial Waste Line to remain in place under West Tower Ave, the main thoroughfare between the hangars, and have so-called institutional controls.  Institutional controls can have a way of being forgotten as the decades roll on, which could lead to workers being being exposed to radium during infrastructure upgrades.  The forgotten lines could also lead to unexpected expenses for the city and to the posting of alarming radiation warning signs long after everyone thought the problem had been dealt with.  Update – October 13 – Another reason to remove the old Industrial Waste Line:  The August 8, 2011 Navy feasibility report cited in this post stated, “The industrial waste line is not considered a candidate for hydro-jetting due to the deteriorated condition of the line.”  Better to remove it than have toxic residue leaking out into the water table.

RAB co-chair Dale Smith said it was premature to vote on alternatives.  The regulatory agencies still have to review the report.

Nuclear Fallout Residue Also Surveyed – The Navy’s contractor also gathered data on the presence of Cesium-137 and Strontium-90.  The presence of these two radioactive isotopes in drain lines was expected due to worldwide data showing that nuclear weapons testing and nuclear accidents such as Chernobyl have caused widespread dispersal.  There are also records indicating that some observation planes that flew through nuclear fallout during nuclear weapons testing were dismantled and decontaminated at Alameda Point as part of the weapons testing studies.

The main reason for concentrations in drain lines at Alameda Point is because of all the concrete pavement that sends high volumes of water runoff into drains.  The levels of Cesium and Strontium concentrations in the investigative samples were within the range that could be expected from worldwide fallout of nuclear weapons testing.

Updated October 12, 2011, in response to inquiry from reader  –  Below is a map and nine pages of test results for Storm Drain Line G, which partly runs along Pan Am Way.   Also indicated is the Main Trunk of this storm drain, which runs from Building 5 on the left of the map to the Seaplane Lagoon on the lower part.  The three horizontal storm drain lines shown below the Main Trunk are called laterals.  Only the Main Trunk portion is singled out for remediation work.

The likely alternative that will be chosen will not be complete removal.  Instead, it will (hopefully) be limited removal and replacement in the few areas that show elevated readings for radium.  One alternative is to not do anything, but rather leave the lines in place with “Institutional Controls,” which means a big hassle if anyone ever wants to do infrastructure work.

The remediation goal for radium 226 is nothing greater than 1.56 pico curies per liter. It’s based on a background level of 0.56 that would be randomly found in Alameda.  This background standard was established by agreement between the Navy and US EPA in prior years.  The remediation goal set by the Navy is nothing in excess of 1.0 above background, or 1.56.  The Navy’s “1-above-background” standard is more stringent than the norm for US EPA.

In looking at the readings in the boxes and on the test result tables, there are only a few locations where radium was found to be a problem.  “MH” in the box means it is manhole that was tested.  “CB” is a catch basin.  One reason for the low readings could be because in 2009/10 when the most seriously contaminated lines – F and FF – were being replaced due to radium contamination, the Navy had Storm Drain Line G power flushed to clean it out.  The contaminated water was properly disposed of.

Another possible reason for the low radium readings is that the point from which it leaves Building 5 (where the radium paint was once used) could have been the least used for disposing of radium paint waste.  This would correspond with the actual results of testing before and after the recent dredging operation on the northeast corner of the Seaplane Lagoon where line G ends.  Other than a few solid objects containing radium, none of the dredged material from the northeast corner required disposal at a nuclear waste facility.  The upcoming dredging of the northwest corner, however, will likely yield elevated radium in dredged sediment.