The vast open space on the western half of Alameda Point is unique among urban areas.  This former Naval Air Station runway area, renown in the recovery effort for the endangered California Least Terns, includes wetlands, grasslands, and opportunities for public trails and wildlife habitat enhancement and appreciation.  At least 180 different bird species have been spotted here in the last decade, including the burrowing owls that spend the winter at Alameda Point.

The Navy transferred 624 acres of the former airfield to the U.S. Department of Veterans Affairs (VA) in late 2014 for construction of a clinic and columbarium, even though they need only 112 acres.  The Navy’s condition was “all or nothing” because it did not want to be stuck with an odd parcel.  The remainder of the VA’s 624 acres was once slated to become the Alameda National Wildlife Refuge, but due to a dysfunctional federal bureaucracy, the refuge plan was allowed to die.

The VA has made it clear that it has no desire and no funding for operating a wildlife refuge.  But the VA is also not opposed to another agency funding and operating an ecological preserve.  The VA is currently funding the management of the Least Tern colony through a contract with the U.S. Fish & Wildlife Service.  The terns are at Alameda Point from early April to mid-August.  The only public access at any time of the year under this management plan will be for the volunteers helping with various tasks at the least tern nesting area and public bus tours on one day in June every year.

The VA is required to provide a shoreline easement around their property to the city, or another public agency such as the East Bay Regional Park District, for construction and operation of a new leg of the Bay Trail.  Most of the trail will be on existing pavement.  Funding for implementation of the Bay Trail and enhancements to the concrete-dominated landscape will take a concerted effort.  The good thing is that the VA will not be building any structures or leasing any of the space on the undeveloped 512 acres.  But they will also not be providing any funding beyond the least tern management. 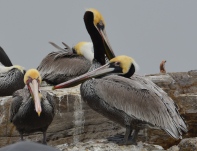 At the southeast end of Alameda Point is the old Navy park that was once called Inner Harbor Park and is now referred to as Enterprise Park.  This area is also in need of conservation action.  For more than two decades, the city has rejected offers from the East Bay Regional Park District to assume control of this parkland.

On the west side of the Seaplane Lagoon, a plan to remove shoreline boulders and surface pavement to create a natural habitat has been incorporated into public plans, but there is no commitment to ever implement this plan.

The city should be promoting the conservation of wildlife habitat, wetlands, the channel and inner harbor, and the creation of trails, boardwalks, wildlife-viewing platforms, and educational programs.  In doing so we can contribute improvements to the ecosystem, add much-desired public open space, and boost the economic value of Alameda Point.

A Plan of Action

De-Pave Park at Seaplane Lagoon:  Make a commitment to implement the wetland-grassland transition from Seaplane Lagoon to federal wetland.  This bold departure from earlier plans that featured a marina on the west side of the Seaplane Lagoon would align with widely-adopted climate action plans to adapt our shorelines and enhance the sequestration of carbon.  This proposed ecological park would be directly adjacent to the existing Runway Wetland on VA property.  The Town Center and Waterfront Specific Plan for Alameda Point, however, lacks any commitment or milestones for implementation.  This post on the Alameda Point Environmental Report explains more.

147-acre Northwest Territories regional park:  Come to agreement on who will own and operate the park.  A large regional park, including Bay Trail, has been proposed for the northern part of the runway area, in the area called the Northwest Territories.  But talks between the city and the East Bay Regional Park District on acquiring this land have stalled.  This area has little if any commercial value due to large infrastructure costs, sea level rise, and surrounding uses such as the least tern nesting area and the planned VA clinic and columbarium.  The city should work toward creating a new waterfront park, which would add greatly to the status of Alameda Point and the recreational opportunities in the Bay Area. 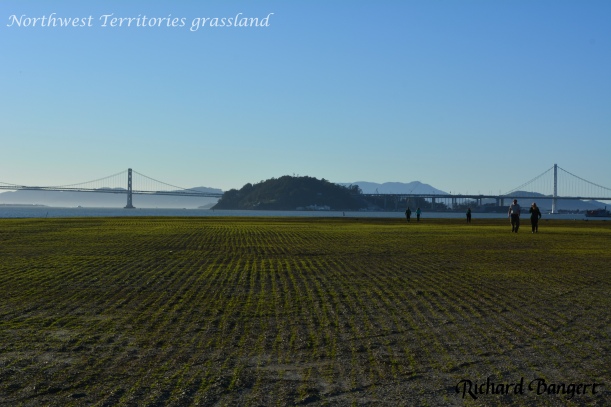 Enterprise Park:  Fix it and open it.  Upgrading this park is an easy first step on the road to revitalization.  This 20-acre triangle park on the southern shoreline of Alameda Point has been part of the reuse plan from the beginning, but little has been done to make it usable.  As far back as 1994 the East Bay Regional Park District put forward a proposal for a park here that focused on aquatic uses, such as kayaking, sailing, and educational programs.

Currently there are actively used soccer fields, the Bay Trail, a few picnic tables, a worn out parking lot, and temporary restroom facilities.  The recreation building in Enterprise Park, with bowling alleys and a commercial kitchen, is boarded up.  The neglected basketball court, tennis court, volleyball area, former campground with lush evergreens, and plastic-trash-strewn beach area have been waiting for action since the last century.  Currently, the park district provides minimal maintenance of the Bay Trail, picnic area, and temporary restrooms from their Crown Beach maintenance yard.

The unique features of this site, including Long Breakwater, the protected waterway for kayaking, and the beach, make this park an ideal candidate for upgrade.  The area is easily accessible, has two parking lots, and is next to an actively used wharf area and the planned ferry maintenance facility.  Plus, it does not have to be built from scratch – it already is a park and would be relatively easy to open to the public.