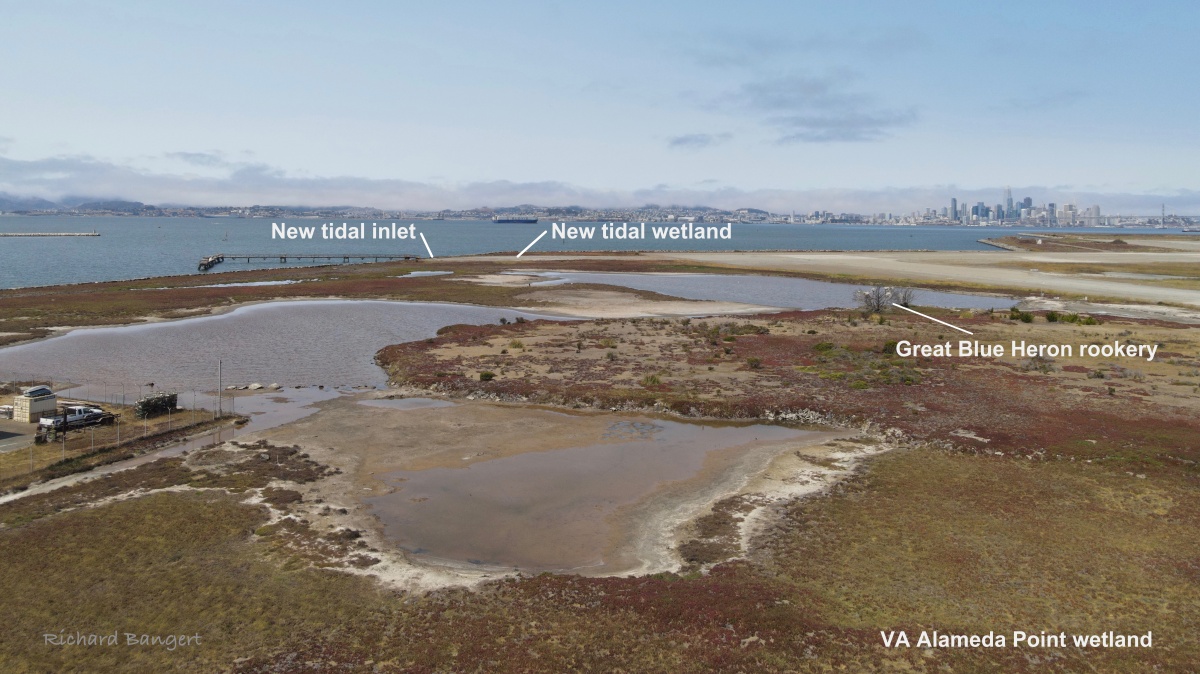 On August 7, the U.S. Army Corps of Engineers awarded a services contract to Adanta, Inc. of Napa to expand and enhance an existing wetland on the Veterans Affairs (VA) property at Alameda Point.  The wetland project is being implemented to offset impacts to wetland areas elsewhere on the VA property where a health clinic, offices and a columbarium cemetery will be built.

“The four-year services contract, valued at up to $2,373,044, includes development, seed collection, propagation, restoration, and enhancement to ensure the wetland is completely established as a self-sustaining tidal marsh at the VA Alameda Point site,” states the Corps of Engineers August 14 news release.  “In total, 8 acres of new tidal marsh will be installed and established, as will 3.3 acres of tidal transitional habitat; and 14.8 acres of existing tidal wetland will be enhanced.”  Seed collection and preparation is scheduled to start this summer.  The work is expected to be completed in 2025.

One-third of the wetland impacts of the VA project will not be offset at Alameda Point.  The Corps of Engineers will purchase credits in the San Francisco Bay Wetland Mitigation Bank for 3.6 acres of impacts.  The mitigation bank manages a wetland restoration project in Redwood City funded by Bay Area projects that impact wetlands.  The credit purchase detail is not mentioned in the news release.

The Corps of Engineers and VA websites have not posted their 355-page “Final Wetland Mitigation and Monitoring Plan.”  Details of the plan, including the mitigation credit purchase, were learned by obtaining a copy from the California Regional Water Quality Control Board, the state agency that approved the plan.  No explanation was given for the credit purchase.

A key feature of the self-sustaining design is a tidal inlet in the adjacent rock seawall to allow Bay water to continually maintain a healthy marsh ecosystem.  The tides flowing through the new inlet will enter a network of channels.  “The pilot channel system is designed to emulate the structure and function of a well-developed slough channel system in a natural, mature tidal salt marsh of similar size,” according to the VA’s wetland plan prepared by H. T. Harvey & Associates, in collaboration with HDR Engineering, Inc. 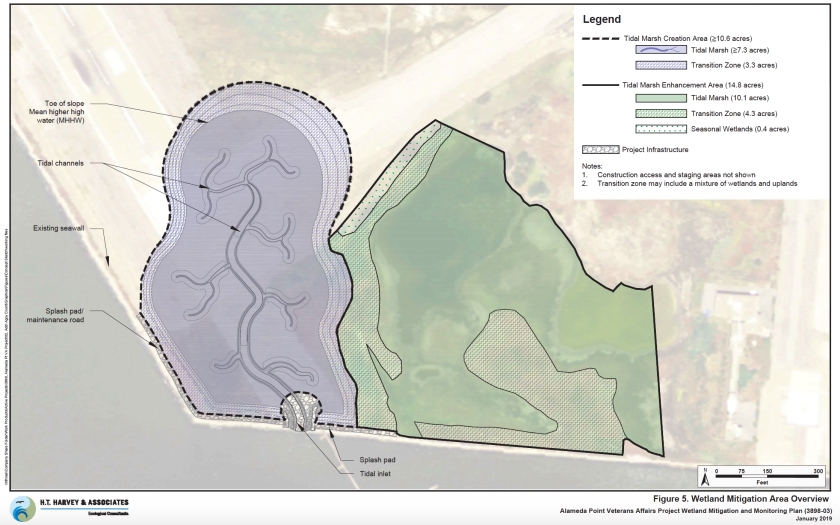 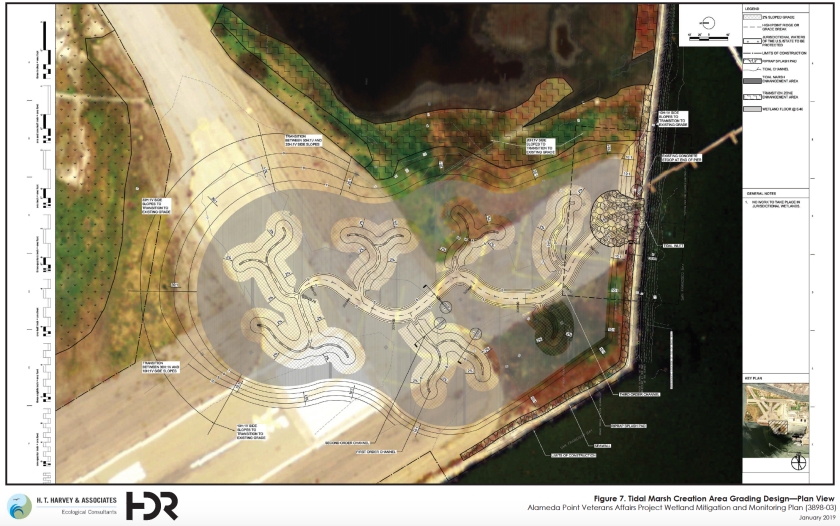 Another key feature of the plan is a transition zone.  “The created transition zone will provide the created tidal marsh with resilience to climate change by providing space for the tidal marsh to spread vertically upslope when sea level rises,” states the plan.  The sea level rise zone will feature a complex mixture of vegetation that will include flowering and seeding plants that benefit birds and insects, as well as dense grasses, herbs, and subshrubs to provide long-term weed resistance.

As part of the project, the existing wetland comprising nearly 15 acres will see the removal of the invasive non-native ice plant and Algerian sea lavender.  “In the restored condition, species such as gumplant, seaside arrow grass, alkali heath, and salt marsh sand spurry (Spergularia marina) will be established in patches within the marsh,” according to the plan. 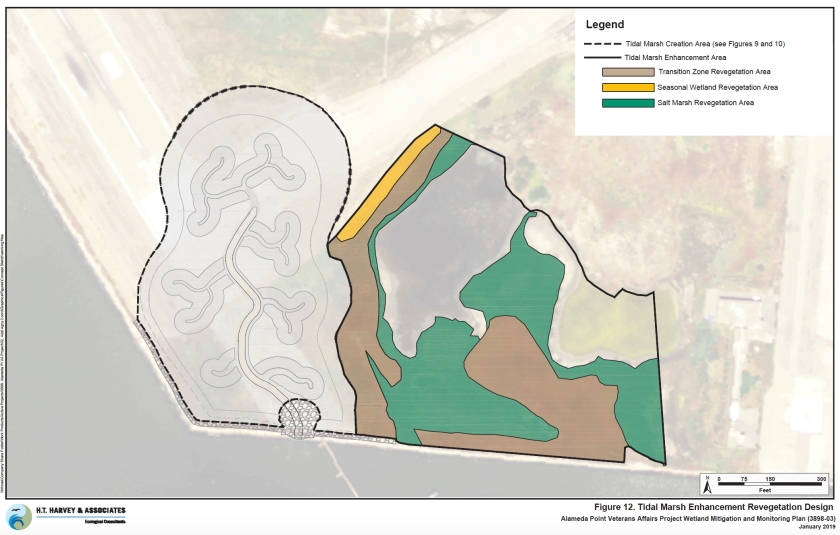 Plants for the tidal marsh will be grown by a native plant nursery using parts, such as stems, gathered from existing Bay Area plants.  But native plants in the historic sandy transition zones around the Bay’s tidal marshes are rare today.  Therefore, the contractor will be seeking to acquire plants and seeds for the sea level rise transition zone from other parts of California from the northwest to the Central Valley.

Work was originally scheduled to begin in September 2019, but was delayed for unknown reasons.  The wetland contract is the first construction contract to be awarded for the VA Alameda Point Project.  On the other hand, no contracts for construction of the clinic and columbarium have been awarded yet, even though Congress has appropriated $113 million for the facilities.  The 2021 budget request for another $152.8 million, if approved, will cover all of the funding necessary for the clinic, first phase of the cemetery and associated infrastructure.

The property is located in the former Navy aircraft runway area.  The Corps of Engineers is responsible for managing large VA construction projects.

Meanwhile, the City of Alameda is in the early planning stages for a shoreline wetland park, dubbed DePave Park, that will connect to the VA wetland. 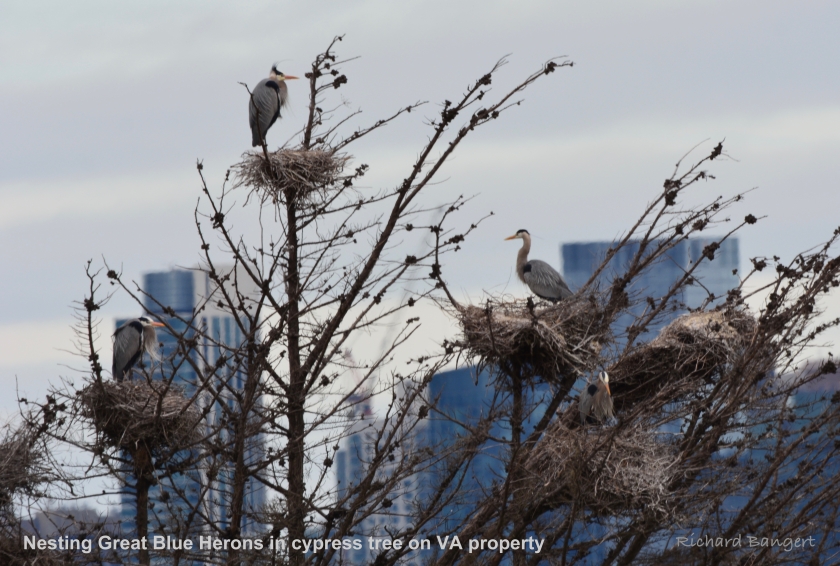 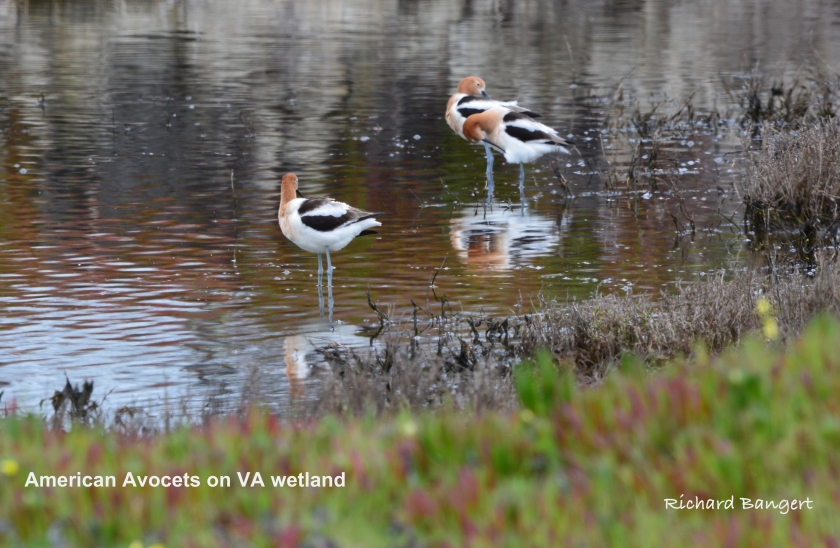 The goals of the tidal marsh creation area are as follows:

The goals of the tidal marsh enhancement area are as follows: