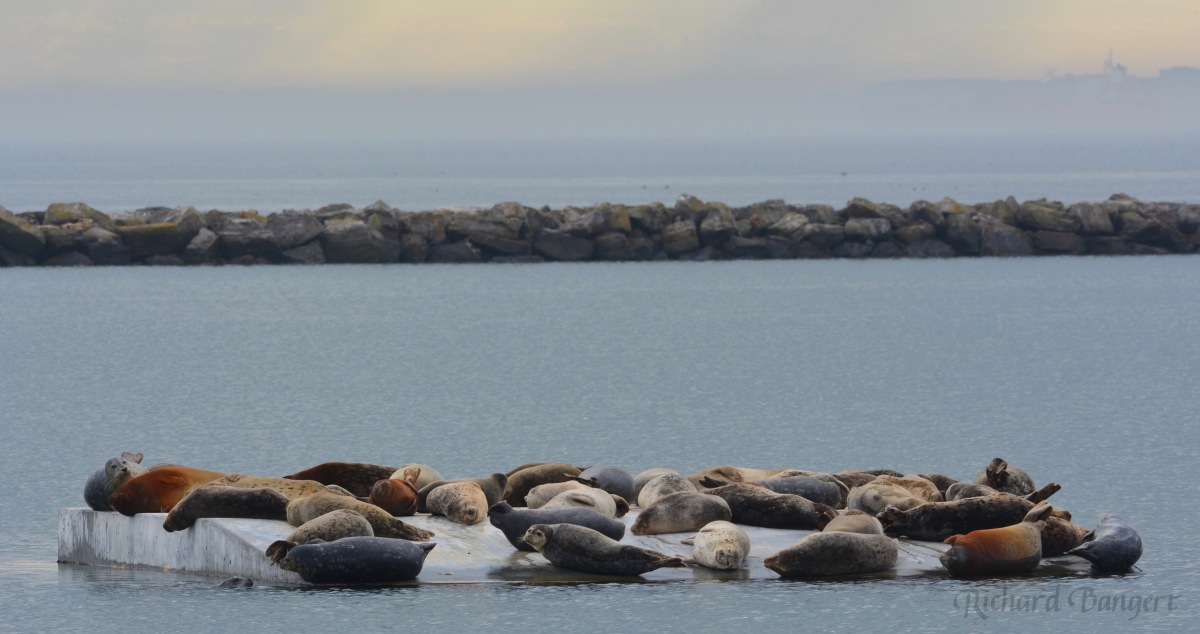 Alameda Point’s harbor seal population fluctuates between single digits and 50 during most of the year on the specially-built harbor seal float.  But when the Pacific herring arrive in the winter to lay their eggs, many more seals arrive to feast on the herring, causing a sudden spike.  Last winter, a spike in seal numbers to a record 70 came on January 5, 2017, in the midst of the herring run.  This winter, the herring arrived sooner, in December, and so did more harbor seals, causing a spike to a new record of 73 on Christmas Eve and Christmas Day.

In the brief time span since the new harbor seal float was set in place, local monitors have assumed that it was simply the colder water temperatures that enticed greater numbers of seals to use the float in the winter.  But in fact, they discovered it’s not the full story.

It turns out that dropping water temperature indeed has an effect, but the effect is on the herring.  Ideal water temperature for herring spawning is between 50 and 53.6 degrees Fahrenheit.  The water temperature at Alameda Point dropped below 54 degrees the afternoon of December 16 and continued dropping another 2.3 degrees, according to data collected by the National Oceanic and Atmospheric Administration.  This brought on the herring run and, in turn, the voracious seals.

“I’m convinced our local herring run began on Dec. 17,” said harbor seal monitor Mark Klein.  “That’s the day I heard sea lions barking while I was at the seals’ site.”  In the following days, the number of seals on the float grew to a record 73 on December 24 and 25.  Since then, the numbers have returned to normal.  “Herring spawning in a given location lasts only for about a week, and is a once-per-year event,” Klein said.

Not far away from Klein on December 17, next to the Alameda Point Channel, Leora Feeney was making bird observations for Golden Gate Audubon Society’s Christmas Bird Count.  She, too, witnessed the beginning of herring spawning.

“There is great evidence that the herring are here, with thousands of gulls, cormorants, and I’d say the most marine mammal activity I’ve ever seen,” said Feeney.  “I saw 16 seals on the surface of the water at one time.  Really amazing.”

Feeney said that the seals were spy-hopping, slapping tails, and watching the people on shore intently.  “Sea lions were chasing each other and wrapping around each other in what appeared to be courtship or perhaps just happy after a satisfying meal, and some were barking,” she said.

While the marine mammals go after the fish, birds go after the eggs in a feeding frenzy repeated around the Bay during spawning events.  Many of the eggs never find a home on vegetation and rocks and are left floating about.  Others become dislodged by currents.

The California Department of Fish and Wildlife (CDFW) conducts herring surveys beginning in early November.  An update posted on its website on December 20 corroborates the observations of Klein and Feeney.  “Pacific herring have finally arrived in San Francisco Bay, with two small spawns detected over the last few days – One at Ballena Bay in Alameda and one at Point Richmond along the outer rock jetty,” notes the website.  Alameda is one of the CDFW herring survey sites on San Francisco Bay, with the most productive herring spawning occurring in Richardson Bay.

The Alameda Point harbor seal float was built by the Water Emergency Transportation Authority (WETA) and delivered to the harbor in June 2016.  The float is located near WETA’s ferry maintenance facility now under construction.  A local volunteer group, Alameda Point Harbor Seal Monitors, keeps tabs on the seals.

The public is encouraged to participate in monitoring.  More information and updates are on their Facebook page.  The seals can be observed from the Bay Trail, which is accessible via the Central Avenue entrance to the water next to Encinal High School. 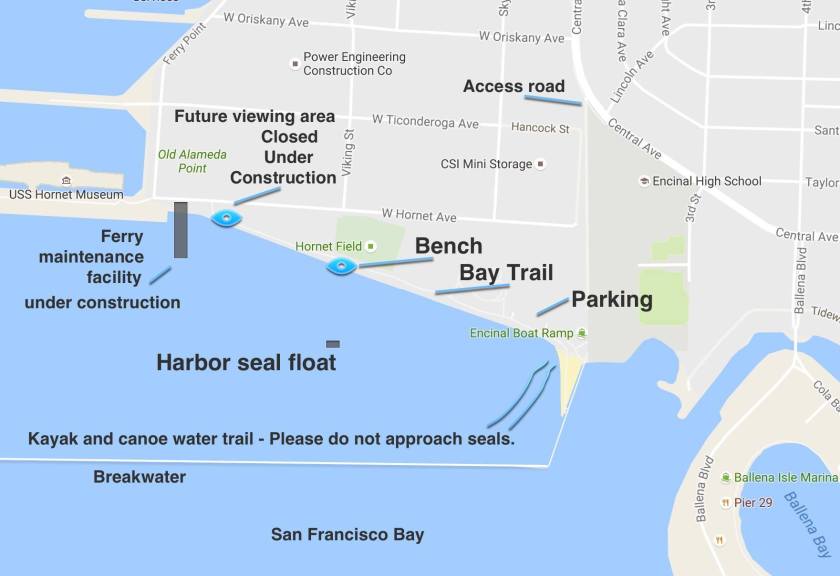